Gambling sites have already been betting that President Donald Trump will be impeached.

“Look, I can’t get into specific volumes,” said Joe Lee, the head of Trump betting at Paddy Power Betfair, “but I can tell you that the impeachment market is probably in the top three in terms of volume that we’re seeing among the Trump propositions.” According to Business Insider, as it stands, Paddy Power’s users put the odds of impeachment at around 20%. They believe there’s an 8% chance Trump will resign, and an 81% chance the president will actually complete his first term.

“We opened up impeachment markets pretty much straight away once Trump got elected,” Paddy Power’s Lee said. Those markets, long dormant, have been particularly volatile over the past two months. Will Jennings, who is the head of public engagement at PredictIt, has seen a similar uptick in impeachment betting.  “This is one of our more liquid and high-interest markets on the site,” Jennings said.

PredictIt’s users have the odds of Trump’s impeachment and they’ve thought of every possible outcome. According to users:

*This data was sourced from Business Insider.

Those four statistics alone are said to be able to help determine exactly how the market perceives the risks of impeachment for the Trump presidency. 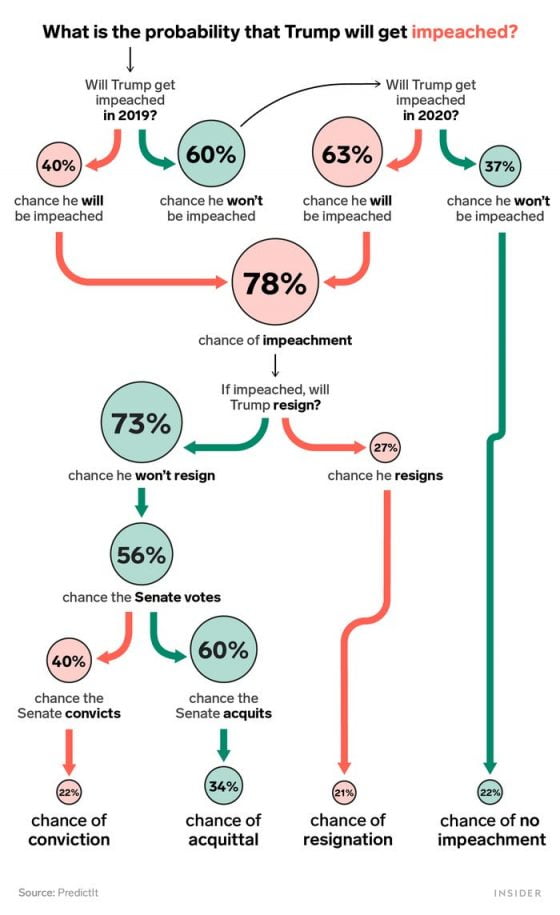 While this is not the last word in the Trump impeachment saga, it can give us a “feel” for how the average person expecting things to play out.  It seems that the average person thinks there is a higher probability of Trump being impeached than not.