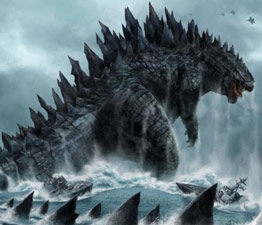 After sending robots into the Fukushima nuclear reactor (and seeing them mysteriously die), perhaps this is the reason why Japanese officials have decided to re-start the building of a huge ice-wall for ‘containment’. As Fukushima Diary reports, TEPCO’s camera caught a possible aquatic living creature in retained coolant water of Reactor 3.

The following images are from the inside of PCV 3 (Primary Containment Vessel of Reactor 3). In their previous investigation, 1 Sv/h was detected above the water surface. Yellow-ish sediment was observed accumulating in the water as well.

The possible living creature is recorded from approx. 0:19 of the video. It looks like aquatic microbe, which is independently swimming unlike other substances.

The following GIF was edited by Fukushima Diary. It contains the zoomed (200% and 300%) parts to capture the creature more closely.

It may not look like much but with radiation flooding through its seemingly impervious body, who knows what happens next?