Former Head Of The Fed: “We Could Have Another Financial Crisis” 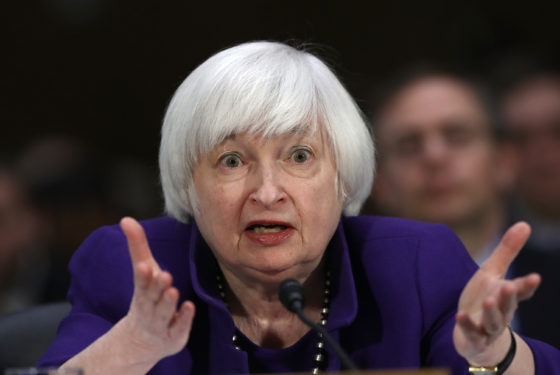 The former head of the Federal Reserve, the United States’ central bank, warns that another financial crisis is most definitely possible. Janet Yellen said that the tools that could help prevent another crisis are not all that great in the U.S.

Of course, what Yellen means is that the government is not using enough violence and force in the form of regulations to prevent an economic meltdown of the central bank’s own doing. “I’m not sure we’re working on those things in the way we should, and then there remain holes, and then there’s regulatory pushback,” Yellen said. “So I do worry that we could have another financial crisis.″ According to NBC News, Yellen cited leverage loans as an area of concern, something also mentioned by the current Fed leadership. She also said that regulators can only address such problems at individual banks, not throughout the financial system. The former Fed chair, now a scholar at the Brookings Institute, said there remains an agenda of unfinished regulation.

Current Fed officials, however, have pushed back against criticism that their reforms are making the system riskier, saying they making the system more efficient. Michael Pento, a money manager and economist says that Yellen is right that a depression is coming, but the central bank is going to be one causing the disaster, not a lack of regulation.

“Unfortunately, a worldwide depression is coming like we have never seen before because we have never before had so much debt sit on top of artificially depressed interest rates,” said Pento in an interview with USA Watchdog‘s Greg Hunter back in May.  “The hubris and arrogance of central banks to take that away, they are way too late in doing so, and they think they can do this with impunity.  They are dead wrong.  They (central banks) have always caused recessions.  We are heading into a global depression.”

Yellen only commented about current interest rate levels and avoided making a statement on the current financial situation of the United States.  “Interest rates are low. I believe they’re likely to remain lower than they’ve been in past decades.” She noted that in a typical recession, the Fed cuts rate by five percentage points while the “normal level” of short-term interest rate is usually around 3 percent. “That means there’s much less scope to cut short-term rates than there’s been historically in the United States,″ Yellen said.