Forecaster Warns: “From Here On Out This Will Not Be A Video Game – This Is Real” 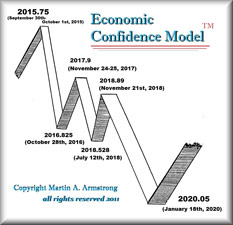 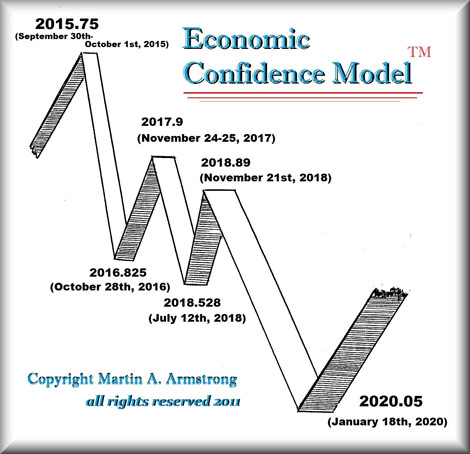 Investors around the world and the general public remain mesmerized by the bloviating from mainstream pundits and politicians who claim the economy is on an upward trajectory and that government has everything under control.

But while everyone celebrates a return to perceived prosperity, one of the world’s leading economic forecasters says that we have now reached the peak in the concentration of confidence in government. With wars firing up all over the globe and trillions in wealth having been wiped out in just the last three months, things are about to get real.

According to Martin Armstrong, we hit a major tipping point on October 1st, a date he predicted years in advance using what he has dubbed his “Economic Confidence Model.”

What’s worse, Armstrong’s war cycle models are converging, suggesting that not only will we see an expansion of international conflicts, but civil unrest will begin to spread precipitously.

Armstrong has previously warned that the situation could become so dire that a Mad Max event is possible and becomes all the more likely as the public loses confidence in the monetary system, economy and the government’s ability to mitigate the crisis.

The following report was originally published at Armstrong Economics and sourced via Zero Hedge:

The unleashing of Russian firepower in Syria in support of the Syrian government came precisely on the day of the Economic Confidence Model. I have come to learn from observing this model that major world events, whatever the major focus may be, appear to line up with the ECM. 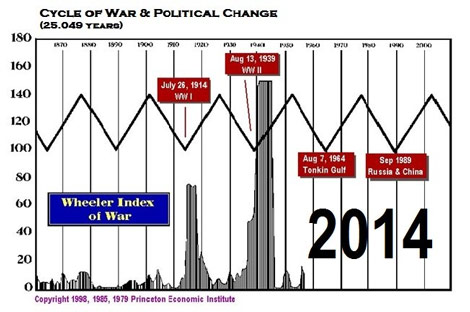 This target has been huge for us given that we have TWO WAR CYCLE MODELS: (1) civil unrest that leads to revolution, and (2) international war. It is sort of like the Blood Moon stuff insofar as it does not line up so easily. The main convergence of the War Cycle between both models began to turn in 2014. The economic war against Russia imposing sanctions began on March 6, 2014 (2014.178) when Obama signed Executive Order 13660 that authorizes sanctions on individuals and entities responsible for violating the sovereignty and territorial integrity of Ukraine. The next day, this order was followed by Executive Order 13661, which claimed that Russia had undermined the democratic processes. On March 20, 2014, Obama issued a new Executive Order: “Blocking Property of Additional Persons Contributing to the Situation in Ukraine”. This order expanded the scope of the two previous orders to the Government of the Russian Federation; it included its annexation of Crimea and its use of force in Ukraine, which the U.S. claimed was a threat to the national security and foreign policy of the United States. Then on April 28, Obama imposed more sanctions on Russia.

The third round of U.S. sanctions on Russia began from October into December 2014 over the turning point. On October 3, 2014, Joe Biden said, “It was America’s leadership and the president of the United States insisting, oft times almost having to embarrass Europe to stand up and take economic hits to impose costs.” The EU imposed sanctions on December 18, 2014, which banned some investments in Crimea and halted support for the Russian Federation Black Sea exploration of oil and gas. The EU sanctions also prevented European companies from offering tourism services and purchasing real estate or companies in Crimea. On December 19, 2014, Obama imposed sanctions on Russian-occupied Crimea by executive order, which prohibited exports of U.S. goods and services to the region.

The actual turning point was 2014.8871: November 20, 2014. The one event that took place precisely on that day was the Supreme Court’s ruling to allow same-sex marriage in South Carolina. This decision sparked civil unrest against the government throughout the Bible Belt states. On that same day, Obama took executive action on immigration. On November 24, the Missouri Grand Jury made ruled not to indict Officer Wilson in the shooting of Michael Brown on August 9, which sparked the beginning of civil unrest, such as the Black Lives Matter movement, in a rebuke of corrupt police forces.

With this turning point on the ECM (2015.75) marking the precise day when Russia began actively bombing Syria to defend its allied government, even sending in troops, should be of great concern in the form of a warning sign with red lights that blink. Russia’s bombings have captured the headlines; the press claims that Russia is attacking civilians but has not mentioned that these civilians are rebels trying to overthrow the government that Obama supported. The press is misrepresenting what is taking place.

There are also reports that China has entered the game by sending in troops to Syria. Obama is creating a threat of world war as Russia and China are now in alignment in Syria and both are opposed to U.S. policy. There is a direct confrontation taking place all because U.S. policy is out of its mind and tries to topple what it calls “dictatorships” from Iraq, Libya, and now Syria. There is no alternative replacement and this brain-dead policy dreamed up in Washington has no end game objective.

This is turning into a direct confrontation between the three leading powers in the Middle East. For what purpose? All because Obama and crew did not like Putin? They created Putin by failing to curtail the bankers who tried to take over Russia to get their hands on all the commodities back in 1999. Whether the government was behind the banking objectives or whether it came in after the fact to protect the bankers amounts to the same thing. This is one reason why they have been trying to block “The Forecaster” from airing in the United States, whereas it has been making headlines and nightly news shows in Europe where they suffered the economic blows of these sanctions.

The other side of 2015.75 will be a lot more serious than many suspect. This concentration of confidence in government marks the peak — from here on out, this will not be a video game — this is real.

Watch: This Is Why The Elite Are Moving Into Gold and Silver: “There’s Blood In The Streets”

The Prepper’s Blueprint: A Step-By-Step Guide To Prepare For Any Crisis

Can This Computer Predict The Future? (The Government Certainly Thinks So)

Alternate View: Economic Crisis Will Cause Stock Markets To Skyrocket: “We’re the Only Game in Town”