Food Rationing: It Will Break You Down Mentally 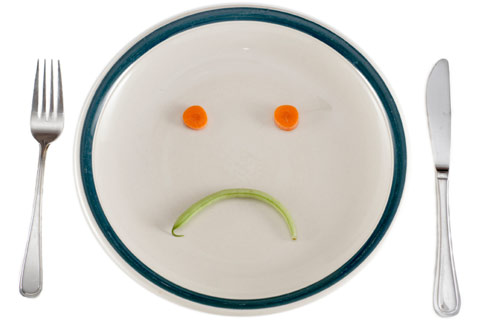 Editor’s Note: With the way current trends are going, chances are that one day you’ll need to break into your emergency food supplies. Whether you’ve stored whole grains, freeze dried emergency foods or meals-ready-to-eat, what it all boils down to is having enough of a reserve to get through a crisis, whether it be short- or long-term. While many preppers have pantries stocked with the basic essentials, one key aspect of food storage that is often neglected are the dietary and nutritional requirements for a healthy diet. In modern day America we’ve become used to a huge diet, often consisting of 2,500 calories or more. But when emergency strikes, and we have no idea how long the effects may last, we could well be looking at a situation where we’ll need to ration our food to the point that we are consuming just half of what we take in on a regular basis in times of stability. If there comes a time when your nutritional intake is reduced by nearly 50% and is coupled with the stress of a crisis and increased physical workload there are going to be side effects. Without the protein, carbohydrates, fats and other nutrients, your body will begin to break down, eating its fat and muscle stores. While that bodes well for getting to our ideal weight, the shock to the human body could be severe. You’ll be plagued with headaches, apathy, tiredness, anxiety, depressed mood, anger and hunger.

In short, you’ll be hangry at the very moment you need to be operating at 100% capacity.

In this extremely informative article, Tess Pennington of Ready Nutrition provides a first-hand account of the effects of a significant reduction in caloric intake. Science shows that we can function on a very low-calorie diet, but making such a change drastically will not be easy. This particular essay provides a basic primer for how you should be approaching your food storage pantry. You can also check out Tess’ Prepper’s Cookbook, which is a concise overview of not only food storage methods, but how to combine the existing stores in your pantry to make highly nutritious and great-tasting meals.

Food Rationing: It Will Break You Down Mentally
By Tess Pennington

Scenario: It’s been two weeks since the cyber attack left your city without power. The grocery stores are empty and supply trucks haven’t been able to re-supply. You’re hungry but can’t go outside because of the roaming mobs attacking people foraging for food. Living off of your last remaining canned soup and survival bars isn’t giving your body what it needs. You’re lethargic, achy, you’re having problems staying mentally alert and have had a headache for days. You just don’t know how much longer you can live like this.

If the foods you store are not able to provide you with adequate nutrition, or you do not have enough variety of foods to carry you through, then you are setting yourself up for caloric deficiencies and even malnutrition which can have long lasting effects on your health.

The following are examples of regular caloric diets and calorie restricted diets. Any diet under 1,000 calories is very unhealthy and steps should be taken to prevent this.

There are certain factors you should consider when living through an extended emergency. It is common for your physical, mental and emotional state to be affected following a disaster. On top of that, you are hungry due to rationing food portions and still have to continue daily activities, physical labor, parenting, etc. If you haven’t put thought into the right types of food and the amounts needed to see you through the ordeal, then you could be setting yourself up for deficiencies in your diet.

Repeatedly, I have told readers interested in leading a self reliant lifestyle to simulate a disaster at home so that your family can practice living through it using the supplies you have. This creates a safe environment to prepare and train family members for what they might expect and help you learn what you may need for the future. Using the contents of your emergency pantry is no different. In fact, you should be using your pantries regularly to ensure the food you store is as fresh as possible. In my cookbook, The Prepper’s Cookbook, I list 25 must have foods for your pantries and also touched on what to expect in an emergency situation when you are rationing your supplies.

I decided to make myself a guinea pig and experiment on how well I could perform my daily activities on a low calorie diet. Here’s what I did:

Are you wondering how I did? Well, good and bad. The good news is, I’m still alive – so it is possible to drastically cut your caloric intake. Even though I was eating very “clean” and giving my body whole grains, lean proteins and nutrients, I still felt the starvation effects and, at times, felt desperate to eat something – anything. I’ll be honest, the word “hangry” came up a few times. From my experience, drastic food rationing can be done (provided you have the right foods to eat), but it would be extremely difficult to go to a 1,200 calorie diet for long term and still try to maintain a household and perform physically demanding tasks. Some of the effects I had while on a 1,300 calorie diet were:

Ironically, these are very similar to the feelings we experience following a disaster or other stressful life event that causes post traumatic stress disorder:

So, imagine going through all of these same reactions listed above and being nutrient deficient at the same time. You will feel the effects in one way or another, and all the feelings will be heightened because you are “hangry.” In a Rawlesian event, where you find yourself in a long term disaster, living off the grid and essentially on your own to patrol your property, maintain a  garden, livestock, etc., it would be very difficult to do all of these tasks with a limited caloric intake.

Let me add that what I did not test was if a gradual caloric decline would be easier to adjust to and still continue with physical labor (maybe an experiment for another time).

Those of you who are creating food pantries should be taking detailed inventory of the foods you are storing, how you plan to use them, and know beforehand an average of how many people you plan to feed using these foods. If you are planning on a disaster or emergency lasting longer term, then you should take this a step further and account for other measures – food rationing. How many calories a day do you plan to consume where food rationing is concerned? Do you plan on participating in large scale physical activity? How long do you plan to ration your food?

Many preppers underestimate how much food they will need to maintain optimum nutrition levels. In fact, calorie intake is the #1 rule to consider when starting a pantry. You simply cannot live off of survival bars. Many people believe these will provide them with adequate nutrition as well keep their energy source going – this just isn’t so.

Stock foods that are energy efficient and high in complex carbohydrates and dietary fiber as they will keep you feeling “fuller” longer. Some food sources to consider are:

For a hands on resource about creating an energy efficient food pantry, Daisy Luther created a detailed resource called The Pantry Primer for how to get your pantry in order in a frugal manner and lists many of these healthy foods.

To conclude, the foods we will carry will make all the difference in the world in terms of maintaining energy levels, and nutrition. Food rationing is an inevitable issue if you are planning for long term or extended events. Plans should be put in place to ensure the rationing we do is healthy and will still enable us to carry on.

Tess Pennington is the author of The Prepper’s Cookbook: 300 Recipes to Turn Your Emergency Food into Nutritious, Delicious, Life-Saving Meals. When a catastrophic collapse cripples society, grocery store shelves will empty within days. But if you follow this book’s plan for stocking, organizing and maintaining a proper emergency food supply, your family will have plenty to eat for weeks, months or even years. Visit her web site at ReadyNutrition.com.

Do you have a question for Tess about this article or another topic? Visit her Facebook Page and join a great community discussion.