Floods? Watch This Prepper Save His Home From Encroaching Water 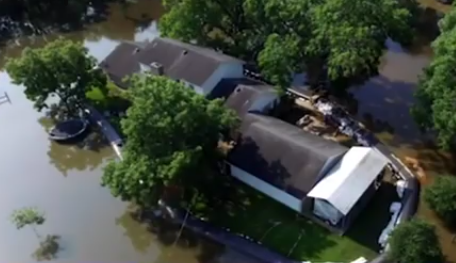 If the water is climbing up, there is generally nothing you can do about your home, business or property.

Louisiana is experiencing this first-hand as a reported 20,000 people have been rescued – some dramatically – and countless others have been endangered from what turned out to be a flash flood of almost biblical proportions. Out of nowhere, total disaster is reigning down on Baton Rouge and surrounding areas.

However, for the determined, there are ways to hold the flood waters back.

This is how one homeowner successfully did so, back in June 2016, when Rosharon, Texas flooded (near the Brazos River just south of Houston) and countless homes were damaged or destroyed by the water.

Defending his homestead, Randy Wagner decided to invest in some preventive flood insurance via an $8,300 Aqua Dam, a giant tube-like barrier that is filled with water, and designed to keep out water.

The flood barrier worked, and cameras show the sanctuary around his yard as the entire surrounding area is drenched in several feet of water.

It made a big enough impression to make the local news. The area is mainly flat, and there isn’t all that much high ground, so the extent of damage was widespread and many people’s lives were impacted:

Few things can hold back flood waters, and many areas are hit sooner or later with historic levels of flooding, that often take their toll not just in damage but in lives.

$8,300 – that amount of money is a sizeable investment that most would not or could not make beforehand, particularly with so many other things competing for priority. But it saved this man the inconvenience of losing things that are irreplaceable, and the hassle of having to start all over again.

There are industrial-sized versions that have been used to dam up rivers and waterways and they have been used in disaster response as well. Particularly if you live in a flood-prone area, it may be a safeguard worth considering.

A lot of people view preppers in a negative light given the way most media outlets portray them. All too often the focus is on paranoia of a looming apocalypse, but the prepper lifestyle is incredibly advantageous especially during a natural disaster. People thought Randy Wagner was crazy when he drove from Texas to Louisiana to pick up a $8300 Aqua Dam, but after the horrible floods in Texas the investment proved invaluable.

The 30″ tall tube can be filled with water to hold back flood water. According to Wagner, “I was the crazy guy. Everybody was kinda, y’know, goin’ by laughing at me. But today they’re really impressed with this.” When the floods came, water reached a depth of 27″ but never broke through his barrier. Once the cost of flood damage has been taken into account, $8300 seems a negligible price to pay to save your home.

Intelligence and thoughtful design of your home and its property can save you from the ruin of predictable natural disasters, and reinforce your family’s chances to survive and withstand many types of threats that can come.

If your home is your biggest investment, does it make sense to prevent it from the worst scenarios?

Amazing! Hero’s Rescue of a Woman and Her Dog from Sinking Car in Baton Rouge Flood Goes Viral

Do You Live in a Flood Zone? You’ll Want to See This.