Flashback: Analyst Says Break-Up of USA Will Be Triggered By Economic and Moral Degradation

Amid hundreds of thousands of signatures calling for secession of individual states from the United States of America, one can’t help but consider the past warnings of former KGB analyst and Russia’s head of the Foreign Ministry for Diplomats, Igor Panarin, who in 1998 theorized that the United States could potentially break up into six autonomous regions.

In brief, according to the Washington Post, Panarin says that mass immigration, economic decline, and moral degradation will trigger a civil war and the collapse of the dollar.

Over a decade after he made his controversial predictions, many who ignored his warnings are now taking note. With U.S. economic growth in an unabated decline, and ethnic and political groups polarized like never before, Panarin’s prescient theories may soon become reality.

I emphasized [in 1998] the three main reasons which, in my opinion, could lead to the collapse of the U.S.

The first one is the moral and psychological factor and the stress of the American population.

The second one is the financial and economic problems.

And the third one is the increase of anti-Americanism in the world.

It would fall into six parts, and I back this up with several factors. First of all there are the ethnic, economical and geographic factors… totally different ethnic groups and ethnic interests.

Texas and the Gulf of Mexico coast are the fuel and energy complex. California is Silicon Valley and high tech. Considering New York, Washington and the Atlantic coast, they’re all financial centers first of all. And the northern states of the U.S. are basically the depressive states of the U.S., close to Canada in their mentality and economic development. This is how I divide these parts.

No [the United States] won’t [be able to save itself]. Obama won’t save America. Obama is an American Gorbachev. He is the one that will lead the United States to disintegration, because he lacks experience.

Panarin’s analysis led him to develop a map of what the United States as we know it today may look like in the future: 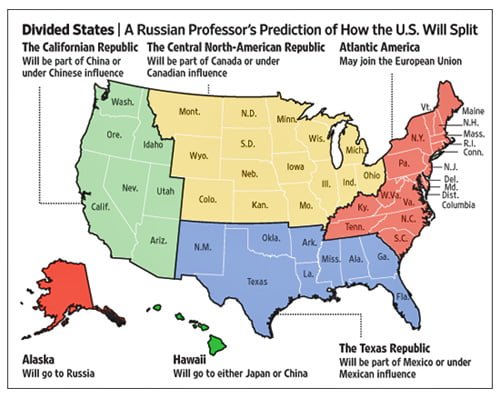 While controversial and completely unfathomable for most Americans, the U.S. government certainly looks to be taking Panarin’s warnings to heart. They have been actively preparing law enforcement and military personnel for large-scale economic breakdown and civil unrest, with urban training exercises that include tanks and infantry taking place across metropolitan areas as recently as last summer.

With the Presidential election behind us and Barack Obama having been re-elected for a second term, nearly a million Americans across all 50 states have given their approval for their respective state governments to move forward with seceding from the Federal government. While the so-called secession movement currently exists solely as a petition by the people for a redress of grievances, any such secession, were it to come to pass, would essentially yield a breakup of the United States of America. Governors and state congressional representatives have distanced themselves from the movement thus far, but that’s not to say it won’t build momentum over time.

With the federal government stocking over a billion rounds of ammunition, riot gear and armored personnel carriers for domestic use, it seems as if officials overseeing domestic security operations understand the risk, especially with tens of millions of Americans arming themselves at unprecedented rates over the last few years.

Panarin’s predictions, made in 1998, may not have come to pass in 2010 as he originally suggested, but events are unfolding in such a way that his message cannot be ignored.

Should the US economy continue to deteriorate, it would have the effect of causing desperation and anger throughout the populace. Blame and finger pointing come next, and that could very quickly descend into violent uprisings and what essentially amounts to civil war between ethnic and political factions.

It’s happened before in the United States, albeit over a century ago.

Could we once again be facing a crisis of our Union so serious that the north, south, east and west will one day meet on the battlefield?