Financial Insider: “We Are Moving Into the Last Stages Before An All Out Collapse” 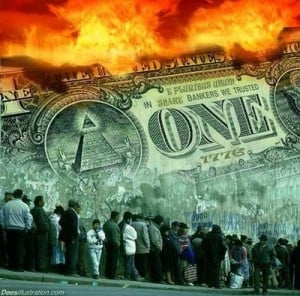 With the United States having reached unprecedented levels of debt and no end in sight, Europe close to widespread destabilization, and Japan now having lost control of their bond market, it should be quite apparent that there is no turning back.

Governments around the world are doing everything in their power to maintain the perception that all is well. Despite their best efforts, however, the coming catastrophe cannot be stopped.

This is critical knowledge and foresight into what is happening, what the triggers for the next collapse will be, and how the world’s elite plan on making their exits.

You will never hear information like this from mainstream media sources until after the fact, if ever.

Be forearmed and forewarned, because as “V” notes, what’s coming will leave no one on this planet untouched.

The collapse that’s going to occur here is going to be a trifecta of bonds, stocks and real estate combined.

The Fed over here has ordered – and I want everybody to listen because this is insider information – the Fed has ordered the U.S. pension funds to begin to acquire U.S. debt. That is coming down the pike, it’s going to start happening, the states are going to start carrying it in order to fatten up their books… So, we are moving into the last stages before an all out collapse.

Now the Rubicon has been crossed… the armies are surrounding the Capital itself.

We’re at a very critical juncture, and that’s what’s got me freaked out the most. The Japanese have lost control and they don’t know what to do at this point. .. They’re telling the public “don’t worry, everything’s ok.”

That is a signs, folks, that they are panicking. That is a sign that everything is not OK… that there is a great fear and trepidation that has begun.

And when this thing goes bust, this is the trigger that’s going to bring this whole thing down.

We’re on the last leg for this whole storybook. Unfortunately, it’s not going to be a storybook ending. So we’re in the last few pages of a chapter that’s been written about a hundred years ago, and it’s soon coming to an end.

Now the question becomes, what exactly are they going to do?

A small scale controlled regional war is not going to fix the $1.5 Quadrillion derivative debt globally.

A small scale regional war is not going to fix the massive levels of unemployment in America, in Europe, in Japan…

It’s not going to fix the economic problems that have festered in much of the western world and parts of the world that utilize a western style of banking.

It’s not going to fix it this time.

You cannot recall this.