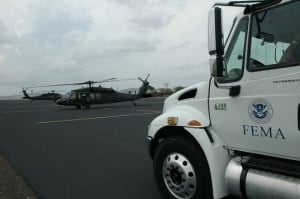 It’s no secret that the U.S. government has been domestically stockpiling unimaginable amounts of ammunition and weapons. So much ammunition, in fact, that it surpasses even what the military uses on a yearly basis in the mid east theaters of war.

All of these arms and ammunition are being transported within the borders of the United States by third-party truck drivers contracted by the Department of Homeland Security, and some of these drivers are reportedly foreign born originating from countries like Russia and Poland.

In a recent radio interview on World News with Dave Vose, a caller relays a shocking story from a FEMA insider that is apparently well known within the FEMA/DHS transportation community, and it has some U.S. drivers spooked.

According to the report, truckers have been hauling large volumes of weapons-related supplies, some of which have been carried by Russian and Polish drivers, to destinations like military bases and DHS supply depots all over the country. But about 30% of the loads operated by Russian and Polish drivers have vanished en route to their destinations, and the drivers are never heard from again.

It’s a story that has appeared nowhere in the mainstream media, and will likely never be validated by the Department of Homeland Security.

But given reports of foreign troops on the ground in the United States, treaties signed by President Obama authorizing the deployment of Russian security experts on American soil, and recent revelations that the U.S. Army is stockpiling foreign made ammunition and supplies, one can’t help but consider there may be a connection.

Vose: This is a person that you’ve been talking to that’s a truck driver, he’s a private contractor for FEMA, and he transports things for them all over the United States and Canada.

What the means I don’t know.

…Everybody’s aware of it, or the truckers at least.

He’s saying he’s going to give it three more weeks and then he’s getting out of there.

That truck drivers have been robbed of their loads would be nothing new. But given that they are of eastern European origination, are working for FEMA, have reportedly vanished during their deliveries, and were carrying weapons and ammunition, is it possible they are somehow tied to the foreign troops reportedly operating on U.S. soil?

This is no doubt a ‘conspiracy theory’, and a grand one at that. But given the scores of other ‘theories’ that have proven to be fact recently, can we completely discount this as a possibility?