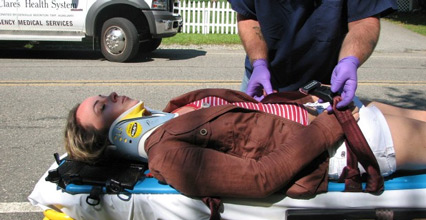 The federal government is asking paramedics and firefighters to be on the lookout for “extremists” as part of a program that aims to uncover “suspicious activity.”

A bulletin released in March 2014 by the FBI, Department of Homeland Security and the National Counterterrorism Center, obtained this week by Public Intelligence, contains details of a program entitled “Emergency Medical Treatment Presents Opportunity for Discovery of Violent Extremist Activities.”

The bulletin, which was sent out to firefighters, emergency medical service personnel and other first responders nationwide, encourages these groups to watch for “indicators of violent extremist activities” during their line of work.

First responders are asked to “evaluate whether an injury is a genuine accident or related to violent extremist activity,” by noting “hastily or expediently treated injuries” which “may be signs of suspicious activity.”

The thought of EMTs becoming distracted by a function which allows them to pretend they have a starring role in CSI Miami, instead of promptly treating someone who is seriously burned, will not fill potential victims of such accidents with much confidence.

Asking firefighters and paramedics to double as amateur spies is sure to prompt criticism that the program will only interfere in the vital functions performed by these individuals and that the government is once again tasking untrained personnel with the job of catching terrorists.

Easily the most ludicrous example in this context was when the TSA trained thousands of workers – mainly hot dog vendors and parking lot attendants – to watch for terrorists at the 2012 Super Bowl.

The program targeting EMTs and firefighters also entrenches the perception that there are potential terrorists scheming inside every American home, creating an atmosphere of fear and distrust, when in fact the statistical likelihood of someone being killed by a terrorist is less than that of being killed by a toddler.

As a Washington’s Blog story highlights, data from 2011 shows that Americans are more likely to be killed by a plethora of mundane things in comparison to terrorism, including drowning in a bathtub, being struck by lightning, or being hit by an asteroid.