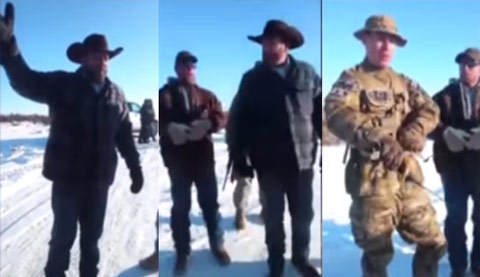 Also See: Patriot Rising: How the Oregon Standoff Could Affect Your Freedoms

What started as a peaceful protest in Burn, Oregon over the imprisonment of two ranchers who lit fires on federal land to curb the growth of invasive plant species and reduce the risk of wildfires on their property has turned into an armed standoff pitting the Federal government against armed Patriot militiamen.

Joining the Burn protest were Ammon and Ryan Bundy, the sons of Nevada rancher Cliven Bundy who was at the center of a grazing rights dispute in Bunkerville, Nevada in 2014. At Bunkerville as many as 5,000 armed individuals from around the country joined the dispute and eventually pushed back scores of heavily armed Federal government agents. At the time, Senator Harry Reid called Bundy supporters “nothing more than domestic terrorists.”

In Oregon this weekend, Cliven Bundy’s sons split off from the main protests with up to 50 people, including militia members, and have occupied the headquarters of the national wildlife refuge. The two are now calling for more people to join the protest and say that they are not only prepared for a years’ long occupation, but are willing to kill (and die) to achieve their goals.

Ammon Bundy, an Idaho militia leader, said that while the occupiers were not looking to hurt anyone, they would not rule out violence if police tried to remove them, the Oregonian reported.

Bundy’s brother Ryan Bundy, who is also an occupier, told the Oregonian that they’re ‘willing to kill and be killed’ if necessary, adding that the federal officials’ actions have been ‘in violation of the constitution’.

‘We’re calling people out here to come and stand. We need you to bring your arms and we need you to come to the Malheur National Wildlife refuge,’ he said.

The second man, dressed in camouflage gear, said the group is challenging the government.

‘Until that line is drawn to say “We’ve had enough of this tyranny, you are going to leave us alone”, it will not change,’ he said. ‘This is the power of America right here.

‘People got together for this and it doesn’t have to stop here. This could be a hope that spreads through the whole country.

‘Everybody’s looking for this hope because the government has beat us, oppressed us and took everything from us. They will not stop until we tell them no.’

But not everyone supports the takeover of a Federal building, especially locals living near the Malheur National Wildlife Refuge, some of whom have called for a law enforcement response. Even Dwight and Steven Hammond, the ranchers facing jail time for their illegal fires, have rejected the Bundy family’s presence.

Dwight Hammond Jr, 73, and his son Steven Hammond, 46, are at the center of a dispute over grazing rights after starting fires to stop invasive plants from growing on their land in 2001 and 2006.

Despite serving jail time for arson three years ago a judge has ruled their initial sentences were insufficient.

But the father and son insist they plan to comply with law enforcement – and insist the armed demonstrators are nothing to do with them. 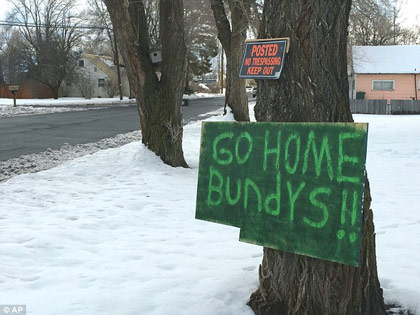 The Bundy’s occupation has come under attack by hundreds of Twitter users utilizing the hashtag #OregonUnderAttack. Citing racial factors, some argue that while law enforcement was quick to deploy riot police in Ferguson, they have done nothing to stop the Bundy’s armed occupation in Oregon:

Via RT: This has, naturally, led to accusations of terrorism by those online who see Bundy’s actions as unlawful, to put it mildly. Those people also believe it is groups like blacks and Muslims who are typically and often unfairly associated with the word. Outrage grew over both a lack of response from the National Guard, as well as the mainstream media’s avoidance of issuing labels where white people are normally concerned.

But according to Harney County Sheriff Dave Ward, law enforcement is planning to take action and has warned people to stay away from the area:

Owing to the location’s remote nature, the authorities largely acted the same as the journalists and issued warnings for people to stay away from the area. They promised more information to come and the sheriff told US media there would be action by “multiple agencies” in the morning.

A standoff is brewing in Oregon. This time, however, militia members led by Ammon and Ryan Bundy have taken over a Federal building with firearms in tow.

Unlike Nevada, where armed protests were taking place on open land , the wildlife refuge building has likely been encircled by law enforcement, so those who do show up to lend support will probably be too far away to make a difference.

While the Bundy’s stand against the Federal government should be applauded, there is something to be said for picking ones battles, as Karl Denninger notes:

There’s an old saying that I’ve heard many times before — if you think it’s time to take a stand grab your rifle and head out the front door.  If you’re the only one out there it’s not time.

The question now is how far the Bundy’s are willing to take this? We can be 100% certain that the multiple federal agencies involved are more than willing to kill to ensure compliance with Federal law.

Watch as the militia outlines their occupation strategy in Oregon:

Also See: Patriot Rising: How the Oregon Standoff Could Affect Your Freedoms