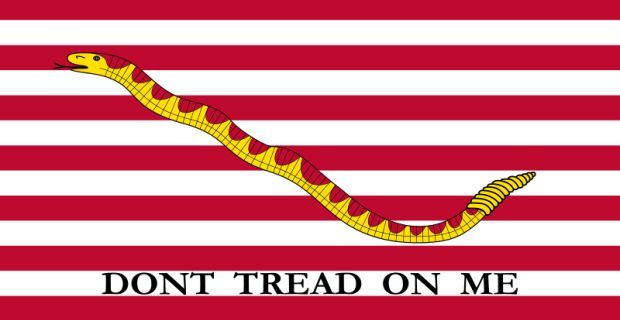 The government of the United States has just provided clear evidence that they are absolutely terrified of the liberty-driven sentiment sweeping the country.

Following September 11th, the US Navy advised all of their special forces operatives in the Sea, Air and Land teams that their new uniforms would consist of a flag bearing 13 strips, the traditional rattlesnake of the Gadsden flag, and the words “Don’t Tread On Me.”

It’s purpose, says Michael Dorstewitz of Biz Pace Review, was to let America’s enemies know who they were dealing with when they faced a US Navy SEAL: “I’m an American warship — don’t tread on me.”

But now, amid the widespread outrage over government interference into the lives of Americans on every level, including our personal communications, individual health care choices, and our right to provide for our own safety and security, the Pentagon under orders from the Commander-In-Chief has decided it’s time to retire one of the longest standing symbols of the individual liberty that has for so long been the tenet of our free society.

On October 22nd of this year Naval commanders received the following email, ordering them to have their men remove the jack worn so proudly by members of our armed forces.

WARCOM and GROUP TWO/ONE have pushed out the uniform policy for NWU III and any patches worn on the sleeve.

Again the only patch authorized for wear is the American flag on the right shoulder. Please pass the word to all.

Though senior commanders refused to speak publicly about the changes, one SEAL stated what should be obvious:

Why would our leaders sell out our heritage? Why would they rob present and future sailors of our battle cry?

When a friend of mine asked his leadership the same question, he was told, “The Jack is too closely associated with radical groups.”

We must assume that this thought policeman embedded in the SEAL community is speaking of the Tea Party, whose flag (which also dates from the American Revolution) depicts a snake with the same defiant slogan as The Navy Jack.

This begs yet another question: Who defines “radical group”? The last time I checked, all military personnel are under oath to “support and defend the constitution against all enemies, foreign and domestic.” The Tea Party stands for constitutional rights and founding principles of civil liberties and limited government. Radical? Not unless you’re a leftist hell-bent on destroying the foundations of our country. Or as the President has stated as the objective of his presidency, “to fundamentally transform” America.

Via The Daily Caller

In 2009 the Missouri Information Analysis Center released an analysis of militias and revolutionary movements operating within the continental United States. It was dubbed the MIAC report, and detailed specific signs indicative of those who may have a proclivity towards domestic terrorism or rebellion.

The Gadsden flag, which closely mirrors the Navy Jack and shares the same motto, and which was also used during the American Revolutionary War, was identified as political paraphernalia often used by radical extremist groups in the United States.

The report called for law enforcement officials on the local, state and Federal level to be on the look-out for those displaying variations of the Gadsden flag, as well as bumper stickers supporting the U.S. Constitution and third-party candidates like Ron Paul.

What should be clear from the government’s latest move to wipe away any official association with the Gadsden rattlesnake and motto is that those supporting any movement not 100% in line with official narrative are to be considered potential terrorists.

In today’s America, supporting the wrong cause, wearing the wrong clothes, pasting the wrong bumper sticker on your car, or saying the wrong thing on the internet can very easily lead to you being added to one of the government’s many red lists and identifying you as an enemy of the state.

They may not be rounding people up just yet for their transgressions against the state, but orders can be given at anytime under the banner of Patriot Act and the National Defense Authorization Act to detain those who could pose a threat to the greater good.

This is America… Land of the Free.