FBI, Secret Service and county police swarmed the home of Marine Brandon Raub after he posted numerous comments to his Facebook wall that were, apparently, flagged by police state Fusion centers as highly suspect and threatening.

At least a dozen local and federal law enforcement personnel raided his home and arrested him:

According to Raub’s mother, he is being held by police and will be evaluated by a State psychiatrist to ensure he is not a threat to himself or society:

He has not been drugged for those of you asking. They are holding him until  Monday when he is to appear before a Judge whom will make a ruling based on the Dr’s (Of their choosing) evaluation of his ability to function in society. Should the Judge deem him a terrorist threat and unstable he will continue to be detained for a greater length of time of which is undetermined.

I am looking into him being evaluated by an outside Dr. of our choosing. I was told that this was not possible. We are seeking legal counsel on this. We do not trust their choice of Dr.’s. He is being held for 72 hours until Monday’s hearing.

He has NOT been accused or booked for any crime. Yet, he was handcuffed, not read his rights and taken away in a police car to be placed into a Psychiatric hospital. Oh yeah, he is an AMERICAN CITIZEN.

What some do not seem to understand or “get” is this, it is not about what someone says or how they said it, or even if I agree with it. This is about the government, OUR government telling us that if you take a stand and speak out against them you can be “taken away”. This is a direct violation of our Constitutional Rights aka “Freedom of Speech”. READ IT, it is clear.

Among some of the statements made on his page, Raub often posted historical quotes, personal opinions, and outbound links to evidentiary material surrounding events like 9/11 and other “conspiracies.”

“Do you know why the American people will win the civil war that is coming? Because we are Americans.”

“And Because we will not stand for oppression. The American people when awakened will become a terrible force to be reckoned with.”

“Death is nothing, but to live defeated and inglorious is to die daily.
Napoleon”

The specific comments that may have alerted pre-crime web surveillance systems that Raub was a potential threat likely included comments posted on August 12 and 13, in which he made mention of a coming revolution:

“Dear men and women in positions in power within our government, corrupt bureaucrats, corrupt judges and police, Nazis in the Marine Corps, Barack Obama and your Communist Cabinet” (linked out to John Cena’s My Time Is Now)

“Friends,
You deserve to kow the truth. There has been an overwhelming amount of evil enacted and planned against you, your children, and your countrymen. It is great in scope. Your government [is] evil. It is as simple as that.
And the calvary is coming.”

“Sharpen up my axe; I’m here to sever heads.”

“The Revolution will come for me. Men will be at my door soon to pick me up to lead it.”

Additionally, Raub posted a Facebook post on August 11 that may have had something to do with raising the ire of the government and powers that be:

Your leaders betrayed you.

You elected an aristocracy.  They are beholden to special interests.  They were brainwashed through the Council on Foreign Relations.  Your leaders are planning to merge the United States into a one world banking system.  They want to put computer chips in you.

These men have evil hearts.  They have tricked you into supporting corporate facism.  We gave them the keys to our country.  We were not vigilant with our republic.

There is hope.  BUT WE MUST TAKE OUR REPUBLIC BACK.

As Brandon Smith of Alt Market notes, Raub is, or should have been in a country that prides itself on the rule of law, protected under the First Amendment, despite how unpopular his views may be for some to digest. The fact that multiple alphabet agencies raided his home for the aforementioned comments is a testament to how restrictive our country has become under the watchful eye of Big Brother.

Slowly, but surely they are eroding our ability to exercise unpopular or controversial speech, to freely assemble in peaceful protest, and to petition the government for a redress of our grievances.

First the establishment started going after current serving military men for their outspoken political views on Facebook and other web venues, men like Marine Sergeant Gary Stein.  Now, it seems the government is going after veterans as well.  This is the classic pattern of a burgeoning totalitarian state; attack a small group first (outspoken serving military) which the public ignores because it affects them little personally, then slowly expand out to eventually include everyone else.  To all those insipid bottom feeders out there who refused to defend Gary Stein’s right to free speech, here is what you have wrought.  Because of your ignorance, the government has been able to set a social precedent which they now plan to apply to a whole new group of people, starting with former Marine Brandon Raub.  The common statist slave will give the typical coward’s response, which would sound a little something like this:

“…When are people going to learn that Facebook isn’t private?  You would have to be stupid to express such views where everyone can see…”

“They didn’t arrest him, they just ‘detained’ him…”

“He’s former military and should be ‘ashamed’ of his comments against the government., blah blah blah, etc…”

The bottom line is, the 1st Amendment is NOT conditional.  ALL speech must be protected, no matter who you are, or where you happen to be speaking.  Just because our current criminal government decides 1st Amendment protections do not apply to Facebook does not mean they have the authority to make such distinctions.  In fact, the Constitution explicitly outlines how they are restricted from making such distinctions.  If a government entity, ANY government entity, attempts to violate Constitutional restrictions, it must be removed by any means necessary.

(Brandon’s comments included observations that 9-11 was done by the government (even going to such length, and an interestingly detailed thesis, of providing evidence to augment this), the War on Terror is a lie, Americans are killing innocent people in the ME, the current federal banking system is corrupt and unfeasible to Americans, and that the George Bush’s family rapes little children)

I would say that all of these claims have enough circumstantial evidence behind them to warrant a serious independent investigation, and even if they didn’t, there is no law against “conspiracy theory”, at least not yet…

The police and FBI also failed to read Raub his Miranda Rights. Could this be one of the first public instances of the enforcement of NDAA detainment provisions against a U.S. citizen as a so called “domestic terrorist”?  You know, those detainment provisions that Neo-Cons and Neo-Libs alike claim “don’t exist”?

My question for the statist slaves is, how soon will it be before they get to you?  Do you really believe your complacency and apathy will save you?  Has that kind of philosophy saved any slave under any other tyranny of the past?  This is NOT a free country anymore, and if we do not act to defend each individual who suffers under the weight of bureaucratic oppression, then everyone will lose everything.  It is time to pick a side.

This video was produced by The Josh Tolley Show

Under the Patriot Act pushed through Congress and renewed by both republicans and democrats, any activity that threatens to undermine the US government – even speech on your personal Facebook account – can and is now considered an act of domestic terrorism.

As outlined by a recent Department of Justice press release, qualifying as a domestic terrorist in the United States is very broad in scope, allowing the State to pick and choose at will:

Attempts to undermine the legitimate currency of this country are simply a unique form of domestic terrorism, U.S. Attorney Tompkins said in announcing the verdict. While these forms of anti-government activities do not involve violence, they are every bit as insidious and represent a clear and present danger to the economic stability of this country, she added. We are determined to meet these threats through infiltration, disruption, and dismantling of organizations which seek to challenge the legitimacy of our democratic form of government.

Once you’ve been chosen by the State to be  made an example of, all Constitutional protections fall by the wayside and are replaced with arrest without charge and indefinite detainment without trial, and even forced expatriation.

This is the new face of the America: 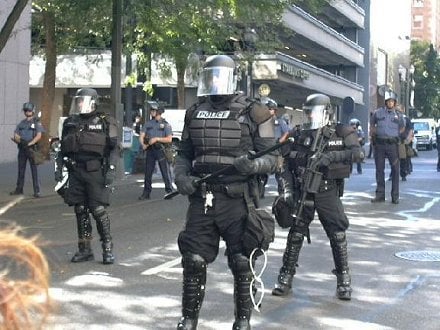 First they came for the communists,
and I didn’t speak out because I wasn’t a communist.

Then they came for the Jews,
and I didn’t speak out because I wasn’t a Jew.

Then they came for me,
and there was no one left to speak out for me.