FACT CHECK: No, Biden is NOT Ending the War in Afghanistan, He’s Just Rebranding It 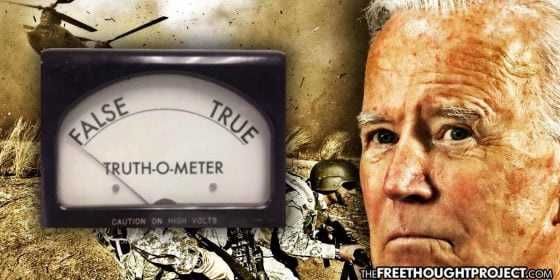 Americans on both the right and the left celebrated the words of Joe Biden’s April 14th speech in which he said, “ it’s time to end the forever war….It is time for American troops to come home.” After all, the idea of ending the brutal occupation of Afghanistan is appealing, but Biden was lying through his teeth.

“War in Afghanistan was never meant to be a multigenerational undertaking,” Biden said. “We were attacked. We went to war with clear goals. We achieved those objectives. Bin Laden is dead and al Qaeda is degraded in Afghanistan.”

Exactly what “objectives” the president was talking about remain unclear, however. Did he mean the epidemic of veteran and active duty suicides skyrocketing as a result of PTSD? Was one of the objectives to kill thousands of US troops and maim, mangle, and mentally destroy tens of thousands of others?

What about Afghanistan, was one of the objectives to destabilize the entire country and turn it into a pit of rubble? Because that certainly happened.

Was another objective to create a breeding ground for Islamist extremism by constantly blowing up innocent civilians ensuring an assembly line of pissed-off Afghans who justly call for the blood of those who dropped bombs on them for decades?

Was the objective to spend trillions of dollars in taxpayer money and future debt and get absolutely nothing in return?

If these were the objectives, by all means, the Biden administration deserves a pat on the back, because, for eight years, they helped to accomplish these objectives. Just like Bush and Cheney before them and Trump and Pence after them, the establishment’s objective of perpetual war did nothing to bolster the freedom and quality of life for Americans and everything to turn the Middle East into a hellscape of death, destruction, and suffering.

To be clear, no one here at the Free Thought Project disputes that it is time to end this war and bring the troops home. The American military never should have been there to begin with and America’s presence there has only served to further destabilize, destroy, and create a breeding ground for terrorism.

The Biden administration knows this. They also know that anyone who declares an end to the Afghan war is lying through their teeth, including Joe Biden. But don’t take our word for it, let’s see what the pro-Biden media has to say about it.

Not 24 hours after Biden declared the war in Afghanistan to be over, the New York Times reported “the Pentagon, American spy agencies and Western allies are refining plans to deploy a less visible but still potent force in the region.”

Wait what? I thought our lord and savior Biden said the war was over? How are all these facets going to remain and the war be over?

“What we are really talking about are how to collect intelligence and then act against terrorist targets without any infrastructure or personnel in the country other than essentially the embassy in Kabul,” he said.

With no “troops” on the ground, CIA and “black” special operations will continue, some of it based in neighboring countries, while a combination of “trainers,” contractors, and non-military assets (e.g., DEA, FBI, State Department) will continue. And of course, given that air and drone strikes are the epitome of counter-terrorism, high-value targeting will continue against al-Qaida and ISIS, and even the Taliban, just from remote bases.

How can Biden declare war to be over if he is still raining down hellfire missiles inside the borders of the country? He can’t. That’s why he’s lying. What he really meant to say is that America’s war machine is simply changing shape and death and destruction will continue to take place — in the name of “spreading democracy” — but it will happen remotely from Georgia, Maryland, South Carolina, and other states instead.

If you want a glimpse into the future of a “remote” war in Afghanistan, you need only look at the hellish scenarios produced by similar tactics in US proxy wars in Yemen, Syria, and Somalia.

What’s more, also absent from Biden’s speech is the fact that the US taxpayers are currently footing the bill, according to the Times, for “[m]ore than 16,000 civilian contractors, including over 6,000 Americans, [who] now provide security, logistics and other support in Afghanistan.”

Is it not considered war when taxpayer dollars flow to private mercenaries to carry out death and destruction in America’s name? If it is not war, then is it a conspiracy to commit murder on a massive scale by hiring thousands of hitmen?

According to a recent analysis from Brown University called the Cost of War Project, the size and scope of the suffering and debt caused by the Afghan war alone, is unfathomable and nearly limitless.

On top of more than 2 trillion in taxpayer dollars paying for decades of senseless violence in Afghanistan, the human toll is soul-crushing. The analysis estimates that 241,000 people have lost their lives in the Afghanistan War, including 2,442 US military service members, nearly 4,000 US contractors, and more than 71,000 civilians.

However, these numbers are likely five to ten times higher or more because they do not take into account indirect deaths due to hunger, disease, water shortages, and more that stem from the horrors of the US conducting war in the region.

After two decades of fighting, neither al-Qaida nor the Taliban have been eliminated, ISIS has emerged, and radical Islam has expanded. Countless veterans suffer daily and so do the families of those who never came home — and it was all for nothing. When will this horror actually end?

Anything short of a complete withdraw of all US funding, assets, contractors, troops, equipment, and yes, remote operations, would be a complete insult to the lives lost in America’s longest quagmire. Anyone who claims the war has ended without explicitly naming everything in this list is lying through their teeth. And that includes the Commander-in-Chief.