Fact Check: Did Obama Detain 90,000 Children At The Border? 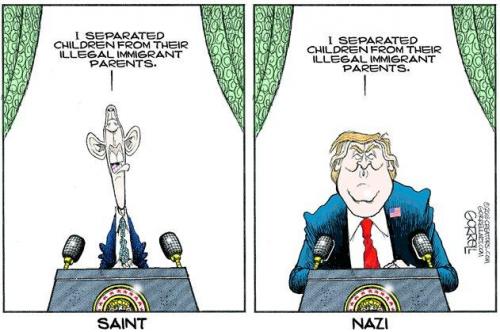 President Trump’s 2020 campaign manager Brad Parscale recently tweeted that “Over 90,000 kids were detained under Obama. And no one cared.”

Over 90,000 kids were detained under Obama. And no one cared

What followed was a barrage of angry tweets and an attempt by AP prove the claim false by conflating two narratives; the first being that Trump is putting separated migrant children in prison-like conditions – which the left quickly abandoned after it was revealed that viral photographs depicting the caged migrant children actually happened under Obama.

One woman interviewed was detained for nearly a month in CADC while she was six months pregnant. She was shackled during transport to and from the facility. At the facility, she was denied monitoring or treatment for an ovarian cyst that posed a risk to herself and the fetus, and received no response to her requests for prenatal vitamins or extra padding for her bed.68 (Her case is described more fully in the box below.) Another woman interviewed was separated from her breastfeeding baby daughter, who was less than two months old, while she was detained in Eloy for two weeks. –University of Arizona

Among those findings are that women did not receive adequate medical or mental health care,were often mixed together with women serving criminal sentences, and were often transferred from faraway states. In most cases, researchers found that women were separated from at least one child. –ACLUAZ.org

Also overlooked is the fact that 80% of children entering the United States are separated from their parents when they’re shoved across the border with a human trafficker, and that migrants can seek asylum in the United States through one of the several U.S. consulates in Mexico.

There are eight U.S. consulates in Mexico. We have an embassy in Mexico. Why aren’t they seeking asylum there?

The previously silent left became suddenly outraged after President Trump’s “zero tolerance” policy of enforcing existing immigration law resulted in approximately 2,000 minors being separated from their parents. To end this, Trump signed Executive Order #13841 on June 25, ordering that detained families not be separated unless the parents pose a danger to the child, while the Trump administration pledged to reunite separated families.

Two days after Parscale’s tweet, AP published the article “NOT REAL NEWS: Obama didn’t separate 90,000 migrant families,” conflating the “separated families” narrative with the “children in cages” narrative – while pointing to a “conservative website” (which they don’t link to) as the source of the claim.

“The claim, published on a conservative website, was repeated on social media throughout the week as President Donald Trump faced criticism over his administration’s “zero tolerance” immigration policy” –AP

What website? Who said that? Parscale said detained, not separated.

The false claim appears to stem from a January 2016 Senate subcommittee report that investigated how the Department of Health and Human Services, under the Obama administration, placed thousands of unaccompanied children illegally entering the country.

The subcommittee report found that from October 2013 through 2015 the federal agency placed nearly 90,000 children with a sponsor, after they were detained at the border without a legal guardian. The majority of those sponsors, the report found, were a parent or legal guardian living in the country. –AP

Note how AP simply says that the 90,000 children were placed with a sponsor… Unfortunately, they’re missing a giant link in the chain; the detention centers the kids are placed in first.

Taking a look at the Senate subcommittee report AP references (page 8), since the thrust of the left’s outrage over Trump’s “Zero Tolerance” policy was originally poor migrant children being forced into cages…

First, we have the 90,000 under Obama figure – but there’s a footnote. Then the report notes that the majority of unaccompanied children over that two-year period were placed with a parent or a legal guardian.

Since the beginning of FY2014, HHS has placed almost 90,000 UACs [Unaccompanied Alien Child] with sponsors in the United States.(31) According to HHS, it places the majority of those UACs with the child’s parent or legal guardian.(32)

Now let’s look at that footnote (31) attached to the 90,000 figure – which directs us to an Office of Refugee Resettlement publication entitled: Unaccompanied Children Released to Sponsors by State.

Navigating over to that document on page 2, we find section “A” which outlines “Cases in which a determination of UAC (Unaccompanied Alien Child) status has already been made.”

It’s got a footnote too…

Asylum Offices will see evidence of these prior UAC determinations in A-files or in systems on the form I-213, Record of Deportable Alien; the Form 93 (the CBP UAC screening form; the Department of Health and Human Services (HHS) Office of Refugee Resettlement (ORR) Initial Placement Form1.

And what do we find under the ORR footnote “1”?

“After apprehending an individual and determining that he or she is a UAC, CBP or ICE transfers him or her to a facility run by the Office of Refugee Resettlement (ORR), which is part of the Department of Health and Human Services (HHS).

In other words – all of the unaccompanied minors detained under the Obama administration were locked up in the exact same facilities the Trump administration is using.

Stats on the minors:

Digging some more, we find a February, 2016 report from the Government Accountability Office entitled Unaccompanied Children – HHS Can Take Further Actions To Monitor Their Care.

In fiscal year 2014, nearly 57,500 children traveling without their parents or guardians (referred to as unaccompanied children) were apprehended by federal immigration officers and transferred to the care of the Department of Health and Human Services’ Office of Refugee Resettlement (ORR). Most of these children were from Central America.

So tens of thousands of unaccompanied minors were taken in by the Obama administration each year and placed in government facilities.

How about today? In 2016, the average stay was 41 days, while the Department of Health and Human Services “Unaccompanied Alien Children Program” fact sheet from June 15 states: “Currently, the average length of stay for UAC in the program is approximately 57 days.” So in 2011, precious children remained in Obama’s “concentration camps” as the left now calls them an average of 15 days longer than today.

Where are most UACs released?

In 2014, most unaccompanied minors were released in Los Angeles, Miami-Dade, and Palm Beach counties. Counties which took in fewer than 50 UACs are not noted on the map.

So to be clear – hundreds of thousands of migrant children whose parents sent them into the United States alone or with a human trafficker remained in Obama administration facilities for up to months at a time, before eventual release or repatriation.

In fact, if one adds up just the unaccompanied minors taken into custody between 2008 – 2016 (here and here), nearly 300,000 children were placed in federal housing under Obama.

And as Brad Parscale points out, no one cared.

Finally, to clarify what ‘we, the people’ are supposed to believe: