Experts Fear Nuclear Famine: “A Disaster So Massive in Scale that No Preparation is Possible” 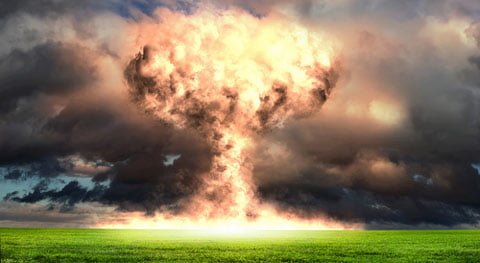 At last count, there are eight countries in the world that have officially designed, developed and tested nuclear weapons. Another two (Israel and Iran) deny they have built or are building such weapons, but the probability that Israel has them and that Iran is building them is believed by members of the international community to be extremely high.

That being said, it’s only a matter of time before a madman at the helm in any of these ten nuclear-armed states decides to push the button. With the global economy in shambles, the world’s super powers mobilizing military assets, and hundreds of trillions of dollars in unservicable debt soon to be realized by the financial community, how long before history rhymes with previous large-scale events that culminated in the fall of the Roman empire or the World Wars that  devastated tens of millions of lives in the 20th century?

Whether that war is a widespread nuclear conflict involving the world’s super powers, or a more limited event in the middle east involving Pakistan and India, according to a new report published by the International Physicians for the Prevention of Nuclear War, a nuclear engagement (even a limited one) would lead to widespread destruction across planet earth, with at least 2 billion people at risk of starvation or death.

The kicker? The effects will be so long-lasting, according to the author of the study, that there’s pretty much nothing we can do to survive it:

The threat of nuclear war has been embedded in global consciousness since the invention of the atomic bomb. Most fears are focused on blast radius and radioactive fallout; but the long-term effects of a nuclear conflict could be far more concerning.

According to new research from the International Physicians for the Prevention of Nuclear War and Physicians for Social Responsibility, a phenomenon known as “nuclear famine” is keeping experts up at night. The study estimates that more than 2 billion people are at risk.

Its author, Ira Helfand, says even a limited nuclear war could lead to “the end of civilization.”

Helfand theorizes it could occur in stages. The first is climate change. Existing literature shows that a regional nuclear war between India and Pakistan could drastically affect temperatures throughout the world. A 2007 study published in Atmospheric Chemistry and Physics predicts that the soot created by such an event could reduce temps by 1.25°C per year for at least a half-decade.

This would wreak havoc on global crops.

The final stage of this catastrophe is starvation.

With his best guess, Helfand breaks the at-risk into three groups: (a) 870 million people already facing malnourishment, (b) grain-importing nations, and (c) the entire population of China. The first group gets more than 75% of its nutrition from grain, and a significant portion would not be able to afford higher prices.

Grain-importing nations, like South Korea, Japan, most of North Africa, and the Middle East, would be hard hit by trading partners who suddenly decide to stop exporting. Additionally, China’s 1.3 billion citizens would use up their rice and wheat reserves in a few months, and international hoarding may make open-market purchases impossible.

As Helfand has said: “This is a disaster so massive in scale that really no preparation is possible. We must prevent this.”

With the vast majority of the world’s nations still unable to build the bomb, a blanket approach could work. ICAN pleads that the “very survival of humanity depends on nuclear weapons never being used.”

The nuclear-armed nations of the world didn’t just build these weapons so they can look at them. Sure, our leaders may claim these weapons are merely deterrents designed to prevent war, but the fact is, advanced weaponry has always been used for the purposes of conquering. Our modern era is no different.

We came dangerously close during the Cuban missile crisis in the early 1960’s. Cooler heads prevailed that day.

And even if starting a war is unintentional, it could happen. On at least one occasion, in 1983, the United States and Russia were literally minutes away from a full-scale confrontation under both country’s policies of mutually assured destruction. It turns out that was a false alarm – but the world was almost destroyed as a result. This is one of the incidents we know about, and given the secrecy behind such military operations, it’s quite possible that there have been more.

The bottom line is that we must assume these weapons will be used at some point – that should be a given. What we don’t know is the scale of the nuclear engagement. It could be that Russia, the United States, Israel, China and North Korea just start lobbing intercontinental ballistic missiles by the hundreds, in which case we’re all pretty much toast. Or, it could be a limited war, with the conflict in India and Pakistan finally coming to a head.

Whatever the case, even if those dropped bombs detonate thousands of miles away from you, there is a strong likelihood that you will feel the direct effects in the form of an almost immediate climate change, food scarcity, extreme price rises, and the riots and looting that are sure to follow.

As with any disaster, whether its a nuclear war, global financial collapse, or a natural disaster, we can fully expect the worst of the worst. As the IPPNW report notes:

We would have to expect panic on a far greater scale following a nuclear war, even if it were a “limited” regional war,  especially as it became clear that there would be significant, sustained agricultural shortfalls over an extended period.

It is probable that there would be hoarding on an international scale as food exporting nations suspended exports in order to assure adequate food supplies for their own populations.

Though the report suggests it is impossible to prepare for such an event, one could argue that survival is certainly possible.

Assuming we survive the nuclear impact and fallout because we live in a strategic location (or just got lucky!), your most immediate concerns would be food, water and self defense, all of which must be considered before such an event occurs if you intend to improve your odds of survival.

Surviving a nuclear winter will, of course, not be easy. According to the report, two billion people could die as a result – probably within a matter of months or a year. A similar scenario would play out should a disaster like a Super EMP weapon or solar flare take out our national (or global) power grid.

Regardless of the disaster, the aftermath, like any crisis or emergency, is survivable.

From the standpoint of preparedness, this means having long-term food stores and a preparedness plan to go along with them. You’ll first need to survive the initial “die-off” as millions of people search for food and resources. Then, when your own food stores run out, you’ll need to be able to produce your own by way of micro-farming and raising your own livestock.

What it will boil down to is adaptability. We can’t predict what will happen or what we will face. But understanding the potential threats, how to mitigate them when they occur, and the options we have available should our best laid plans fail gives us a much better chance of surviving disasters than just pretending like they can’t ever happen.