The Supporting Safe and Responsible Development of Unconventional Domestic Natural Gas Resources Executive Order seeks to create what amounts to a Presidential super committee that will oversee the regulation and development of the ‘unconventional’ natural gas industry for the purpose of ensuring a long-term natural gas supply for the United States, as well as to do so in a safe and environmentally responsible manner.

While natural gas production is carried out by private firms, and States are the primary regulators of onshore oil and gas activities, the Federal Government has an important role to play by regulating oil and gas activities on public and Indian trust lands, encouraging greater use of natural gas in transportation, supporting research and development aimed at improving the safety of natural gas development and transportation activities, and setting sensible, cost-effective public health and environmental standards to implement Federal law and augment State safeguards.

Because efforts to promote safe, responsible, and efficient development of unconventional domestic natural gas resources are underway at a number of executive departments and agencies (agencies), close interagency coordination is important for effective implementation of these programs and activities.  To formalize and promote ongoing interagency coordination, this order establishes a high-level, interagency working group that will facilitate coordinated Administration policy efforts to support safe and responsible unconventional domestic natural gas development.

The target of the legislation is what many believe is the unrestricted and out-of-control drilling practices of hydraulic fracturing, or fracking, a process which blasts water, sand and chemicals underground to stimulate the release of natural gas. Fracking has led to health concerns from environmentalists and others for its potential to pollute the air and contaminate drinking water. Some theories also suggest that fracturing may raise the likelihood of earthquakes in areas like the central United States, an argument that many scientists agree is plausible. 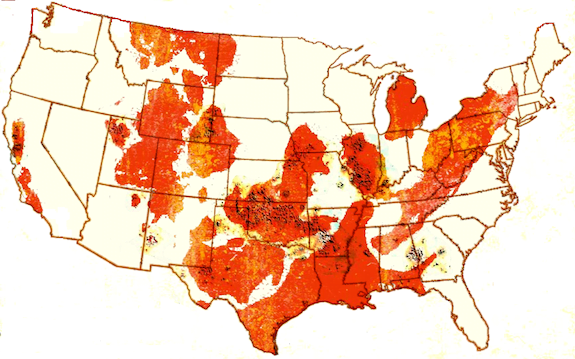 Several industry groups have applauded the President’s move to curtail the industry, with American Petroleum Institute head Jack Gerard saying his organization is “pleased that the White House recognizes the need to coordinate the efforts of the federal agencies that are reviewing, studying or proposing new regulations.”

The President’s order establishes an “Interagency Working Group”  to be composed of deputy level or higher representatives from federal agencies that include the Defense Department, Transportation, Agriculture, Health and Human Services, Energy, Homeland Security, and the Environmental Protection Agency. The working group has been tasked with supporting the safe, responsible and efficient development of unconventional domestic natural gas resources.

Now that the President has given the go ahead, there’s nothing holding the government back. The fracking industry stands to be impacted almost immediately, with federal agencies prepared to tear into operations nationwide in short order:

The Obama administration is taking new steps to increase federal oversight of hydraulic fracturing, or fracking, a drilling method that has helped usher in a natural-gas boom but brought with it environmental concerns.

The Environmental Protection Agency is slated to unveil final oil-and-gas air pollution regulations next week that would cut smog-forming and toxic emissions from wells developed with fracking. Separately, the Interior Department will soon float rules for fracking on public lands.

But not everyone agrees with what is considered by many to be a further expansion of the federal government into industries traditionally reserved for State regulatory agencies. “We don’t need another working group, or any more bureaucracy, ” responded republican Congressman John Boehner through a spokesman.

According to opponents of the legislation, by Presidential decree the federal government can now coordinate action through thirteen core federal agencies against any domestic natural gas production facility and according to standards determined to be appropriate not by law, but because of political agenda.

Moreover, because a key stated purpose of the Executive Order is to ensure long-term supplies, the President’s decree gives the federal government the ability to shut down gas production operations as they see fit, potentially leading to government price fixing and centralized control of an essential natural energy resource.

While the President’s Executive Order aims to curtail the unsafe and environmentally dangerous practices of the fracking industry, it further expands government control over our lives through more centralization of power and bureaucracy.