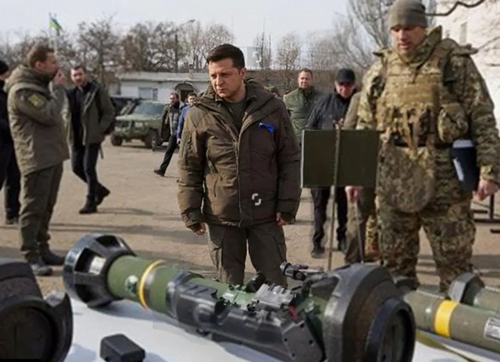 In a weekend German media interview the head of the European police agency Europol has issued a dire warning about the huge amount of weapons being pumped from the West into Ukraine.

Europol Director Catherine De Bolle told the German newspaper Welt am Sonntag that the flood of weapons on the Ukraine-Russia battlefield could end up in the hands of criminal groups for years to come. “At some point, the war will be over. We want to avoid a situation like the one that followed the war in the Balkans 30 years ago,” she said to the publication in reference to conflicts in the wake of Yugoslavia’s collapse.

“The weapons from this war are still being used by criminal groups today,” De Bolle emphasized in speaking of Balkan conflicts, and what’s looking to be a similar situation emerging in Ukraine.

“The situation is highly dynamic and fragmented and we’re receiving different figures from our European partners,” De Bolle said. She stressed that in response her agency is seeking to “find a way in which we will deal with the situation after a possible end to the war.” She described that this will involve Europol “assembling an international task force that will address this issue.”

The Ukraine conflict has attracted a reported tens of thousands of foreign volunteers after the government in Kiev established a foreign legion. This has also included American and British military veterans and mercenaries. On this, she explained as cited in Deutsche Welle:

People traveling to Ukraine have different experiences and ideologies. But she said that even those who become disillusioned by the violence they witness there will be under observation.

Russia, for its part, has long highlighted far-right and neo-Nazi groups and the danger of arming them. Azov Battalion in particular had been on the front lines in what is now Russian-controlled Mariupol and is believed to be a main Ukrainian fighting force in Donbass.

The Kremlin has especially complained about Stinger missiles from the US flooding the Ukrainian battlefield. Stingers don’t only pose a severe threat to military aircraft, but to civilian aviation as well.

The type of scenario that Europol’s De Bolle is now alarmed about has already played out in Syria, as has long been documented, given that twin CIA and Pentagon programs to arm so-called “moderate rebels” resulted in an array of weapons, including TOW anti-tank missiles, going straight to Syrian al-Qaeda, ISIS, and all terror groups in between.