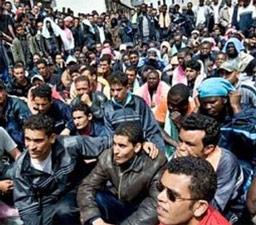 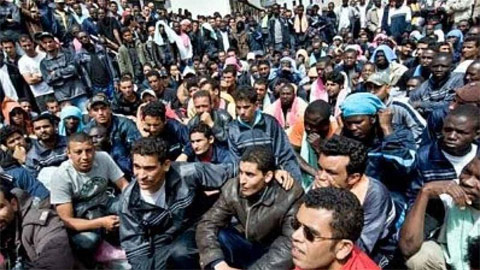 (Pictured: Islamic immigrants pour into Europe by the millions. Despite reports that the majority of migrants are families, over 90% are single males, some with extreme cultural views that have led governments to issue warnings to citizens.)

After decades of berating Americans for their Constitutionally protected right to bear arms, Europeans are finally starting to wake up. It took over a million Islamic immigrants and violence across their union to convince them, but it appears that they finally get it.

In Austria, the scramble for self defense firearms is on as reported by The Daily Sheeple:

Despite how hard it is to attain these weapons in countries like Austria, firearms are currently being sold there in record numbers much like they are in the United States. But instead of the threat of confiscation, this trend is being fueled by the refugee crisis. According to a Czech TV report, pretty much all of the long guns in the country have been sold out for the past three weeks. One gun merchant revealed that most of the buyers are women who want to protect themselves, and those who can’t buy firearms are buying up pepper spray.

Prior to the refugee crisis, most gun buyers were sportsman and hunters. Now there is a growing interest in buying weapons for self-defense. And according to Alan Gottlieb, vice president of the Second Amendment Foundation, European attitudes on firearm ownership are beginning to shift. “I just returned from a gun rights meeting in Belgium, and I can attest that all over Europe people now want the means to defend themselves. Self-defense is no longer a dirty word. In countries like Austria, where it is still legal to own a firearm, gun sales are at record levels.”

It looks like those crazy Americans aren’t so crazy anymore.