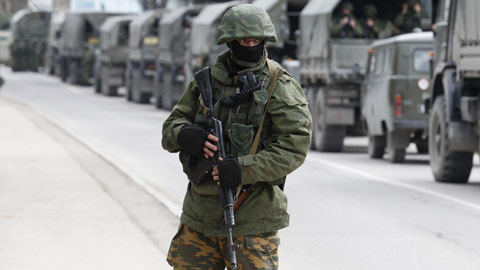 For those who thought that the crisis in the Ukraine is over because it’s been out of the mainstream news for 72 hours, think again.

According to reports, Vladimir Putin has now deployed a massive military force on the Ukraine/Crimea border. Formerly one country, it has now effectively been split in half, spurring condemnation from the United States and Europe.

In August of 2013 President Obama warned of imminent military action in Syria. He quickly tucked his tail between his legs after Russia hinted that they would launch retaliatory strikes. Now in Ukraine, where US-sponsored intelligence teams likely plotted, organized and executed a “revolution,” Obama’s rhetoric has once again led to a stand off. And for all intents and purposes, western forces have essentially backed down.

If the following is any indication, Vladmir Putin isn’t just talking. Crimea has been annexed. It is now a member state of Mother Russia. The only question is whether or not the Russian President is prepared to cross into Ukraine to “protect” Russian interests.

By all accounts, Putin is preparing for war.

Ukraine warned last night that 80,000 Russian troops were massing on its borders and could invade – as world leaders told Vladimir Putin to back off.

A senior security chief in Kiev said Moscow could launch a full-scale  invasion and Russian troops would be in the Ukrainian capital within ‘two or three hours’ of the order to advance.

Last night senior British officials told the Mail they had received reports about Russian troops massing on the border since Tuesday and were concerned by the show of force.

British intelligence is unsure whether the movements are intended to back up the annexation of Crimea, preparation for an invasion or simply defensive.

The Group of 7 Industrialized nations led by President Obama and UK Prime Minister David Cameron responded to the show of force by threatening action bilateral action.

Leaders of the Group of Seven economies told Russia on Tuesday to stop its work on a referendum in Ukraine’s Crimea region and “cease all efforts to change the status of Crimea” or face action.

“Should the Russian Federation take such a step, we will take further action, individually and collectively,” the G7 statement said.

It’s not clear exactly what the response will be should Russia fail to withdraw.

It should be clear by now that Russia will never, ever give up Crimea.

Crimea, for all intents and purposes, is now lost to the west. The border is in a state of total lock down, complete with mine fields:

To highlight the seriousness of the situation, take a look at the following video depicting a dramatic confrontation on the border as CNN journalists attempt to enter the country.

As far as Russian soldiers are concerned, they are in an Iraq-like war zone and they’re taking no chances.

Here on the home front the American people are anxiously awaiting news of when President Obama and family will be taking their next luxurious golf outing.