Election 2012: How The Winner Will Destroy America 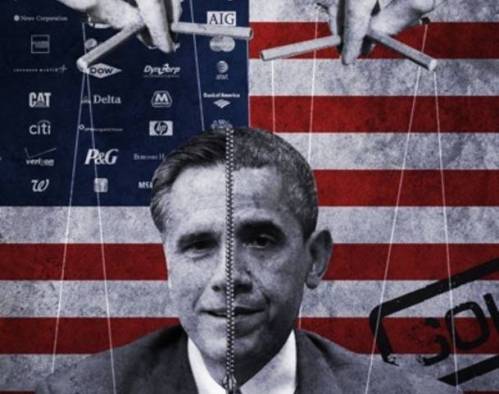 After all the hollow and uninspired elections that this country has suffered through over the past several decades, one might think that at some point long ago the American public would have finally struck a plateau of disenfranchisement; that we could sink no further into despondency, that there is a saturation limit to the corruption of our voting process.  Unfortunately, there has been no such luck.  I have to say that in all honesty I have never seen more people gut jumbled and disgusted with our electoral system than I have in 2012.  Sure, there is still a hyper-gullible segment of the populous that continues to play the game, but even those idiots are beginning to admit that the choices offered are dismal at best, catastrophic at worst.  The fog of the false Left/Right paradigm is starting to lift, and all that lay in its wake is a hoard of lost wide-eyed flabbergasted followers without a coattail or a talking point to cling to.  Sudanese refugees have a better chance of survival than these people do…

Even in the more obvious of fraudulent past elections there was at least an attempt by the establishment to present a pageant of conflicting ideologies (George W. Bush vs. John Kerry comes to mind).  There has always been the Democrat who pretends to be anti-war, or the Republican who pretends to be small government, or the Democrat who pretends to defend our right to privacy, and the Republican who pretends to be pro-2nd Amendment.  But in 2012, even the theater of rhetoric has disappeared.  Both primary party candidates seem to be sharing the same intestinal tract and the same teleprompter, and now, the average American is asking a new set of questions.  They do not wonder how these men will change things for the better.  Not at all.  Instead, they wonder which one will do LESS DAMAGE while in office.  This is the terrible reality we have come to understand in our society today.  It is a sad awakening, but a necessary one.

As you read this now, the new President of the United States is being “chosen” or has been chosen.  Whoever the “winner” happens to be is ultimately irrelevant.  They do not count.  They are mascots.  Middle management cronies running through the motions to distract the masses while enacting the policies of their superiors.  They are fry cooks serving greasy overpriced democracy with no real sustenance.  What does matter, though, is what comes next.  I’m sorry to say that the idea that one man will do less damage than the other is a naïve sentiment.  Democrat?  Republican?  Obama?  Romney?  The crimes and calamities wrought will be exactly the same.  Take a look into my crystal ball and see the future.  Here is how the winner will destroy America…

Neither candidate has expressed any interest through the election or even before it to protect the value of our currency, and both candidates have supported steps towards quantitative easing and fiat printing in order to delay an inevitable national debt crisis.  Both Romney and Obama have sung the praises of Ben Bernanke (Romney changed his tune just in time for his campaign, but who’s buying that?) and the private Federal Reserve despite the consistent failures of that despotic institution to produce any tangible economic results with their Keynesian methods.

The dollar will see a vast devaluation during the term of this candidate and a loss of world reserve status, leading to stagflation (a combination of the worst elements of deflationary and inflationary crises in the same event).  Skyrocketing prices and crumbling unemployment will be the highlights of his presidency, because he will never take measures to reign in or dismantle the primary root cause of the problem; the Federal Reserve itself.

Neither candidate has offered a practical or operable solution to the $16 trillion official national debt problem we now face, let alone the tens of trillions of dollars in entitlement obligations that the Treasury Department never talks about.  A nation can only live off food stamps and credit for so long before it implodes like a wet paper sack. And this is exactly what we have become; an entire culture of debt addicts and money hounds searching for our next fix of foreign or central bank cash.  The fact is, both Obama and Romney would INCREASE spending while using fiat injections to buttress an ever weakening economy in the name of “stability”.  The new president will claim that if spending cuts are initiated, it will send the U.S. financial system into a tailspin and a “return” to recession conditions.  This will of course be a lie.  We have not left recession/depression conditions since 2008.

There is no such thing as a mainstream “anti-war candidate” in 2012.  Not even a fake one.  Obama’s measures of state violence and complete lack of respect for the sovereign internal matters of foreign nations surpass the madness of George Bush Jr.  He has even gone so far as to assert that his office has the right to assassinate American citizens without trial, evidence, or due process of the law.  Not only has he asserted the right to this power, he has used it!  Romney’s position, hilariously, is that Obama has not gone far enough!  Either way, the winner in 2012 is going to leap like a vile locust into new countries and unleash a plague of laser guided death.  The next president WILL be a war hungry president.

4)  He Will Lock Down The Web And Limit Internet Speech

Both Romney and Obama have expressed a desire to establish cybersecurity measures which include vast new governmental authority over the functions and operations of the internet.  The ultimate goal?  To gain legal precedence for the right to dictate web content, up to and including the ability to label any website a subversive threat to national security or a recruitment tool for “extremists”.

With the establishment spreading completely baseless accusation of cyberthreats coming from every corner of the globe (but mostly from Iran) it would seem that they are conditioning the public for a future encounter with a cyber event, and telling them who to blame when it occurs.  The problem is, the most prominent cyber security threats to the internet in the past few years have come not from the Middle East, or Russia, or China, but the U.S. and Israel (Stuxnet anyone?).  Keep this in mind when our new president blames the next cyber attack on a convenient political target and then uses the event as an excuse to regulate the web.

5)  He Will Erase American Civil Liberties

This president will find a reason, or he will create a reason to diminish Constitutional protections including our right to trial and due process.  Both candidates have offered unflinching support for the National Defense Authorization Act and its provisions for indefinite detainment.  Neither man has ventured any sincere concerns over the broad nature of the language involved in the labeling of “terrorists” and “extremists”.  Literally anyone can now be categorized as an enemy combatant and a threat to national security for almost any reason, and this appears to be the way Obama and Romney like it.  That is to say, they both want totalitarian powers, or at the very least, they have made no effort to turn them down.

It is important to note that there has never been a government in history that sought out such powers and did not actually use them.  Only a fool would assume his favorite elitist candidate in 2012 will not utilize the extreme authorities now amassed for the executive branch over the past decade.

6)  He Will Embrace A Globalist Dynamic And Abandon American Sovereignty

Both Barack Obama and Mitt Romney are surrounded by “advisers” who are also members of the Council On Foreign Relations, an institution which openly calls for the dissolution of American sovereignty on a regular basis and the creation of a centralized global system dominating the financial, social, and political life of every nation in the world.  With the economic stability of the U.S. on the verge of oblivion, it is very likely that a historic crisis will ensue during the first term of the next president, and that he will in response suggest a new global system as the solution.

This system has already been created, in part, by the IMF and World Bank in concert with member governments and revolves around the issuance of a new world reserve currency (Special Drawing Rights) as the centerpiece.  I can guarantee with absolute certainty that the next president, regardless of who he happens to be, will promote an IMF rescue package coupling the dollar to the SDR and turning over full economic control of America to an international body.  He will make it sound rational, reasonable, and even advantageous, but in the end, he will be selling the globalist snakeoil he was conscripted to sell before his election campaign ever started.

In 2012, it will not be about voting.  It will not be about “winning”.  It will not even be about getting to the next election.  It will be about survival.  As big a joke as the 2012 elections have become even to the generally unaware, I am not laughing.  I do not need to look at the promises of either candidate.  I do not need to weigh their half-assed quick fix policies.  All I have to do is look at the current downward trend and understand that the president, whoever he may be, will continue it.  If anything is to truly change, it will be because we as Americans finally walk away from the game, enacting our own solutions and our own opposition instead of handing over our power to sniveling errand boys wrapped in flags and expensive suits and self-rightousness every four years.  2012 is going to be the beginning of upheaval and renewal, for better or for worse, and it is certain that the guy in the White House into 2013, Republican or Democrat, is going to be a part of the problem, nothing more…