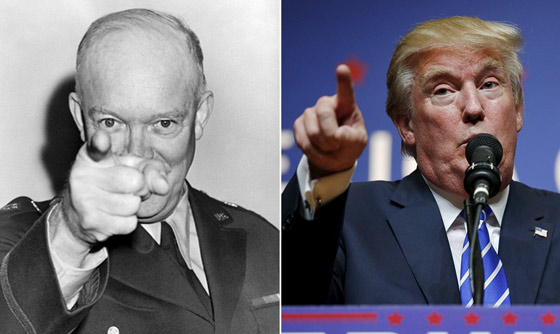 President Dwight D. Eisenhower once gave a monumental speech about the military industrial complex that controlled every facet of American life.  The speech was stirring, but only for a moment: one day of good words doesn’t make up for 8 years of heinous actions.  Eisenhower was elected in 1952, promising “peace with honor” in Korea, and he won in a landslide.  He had a great slogan to run on:

“Let’s Clean Up the Mess in Washington.”

And then he went about making even more of a mess.  On July 26, 1953, he and his administration negotiated the truce/cease fire with North Korea and still managed to leave 400 U.S. soldiers in Chinese prison camps.  By the time Eisenhower was “done” with the U.S. and left office, he had given Communist nations such as Poland and Yugoslavia, as well as “neutrals” then, such as Indonesia and Congo more than $7 billion.

Eisenhower also appointed Earl Warren as Chief Justice of the U.S. Supreme Court.  Under Warren, from 1956 – 1958, the Supreme Court rendered verdicts on 52 cases involving communist subversion and espionage in the U.S.  Most of those decisions came down to a 5-4 vote with Warren’s being the deciding factor.  The communist-defendants’ positions were upheld 41 times as opposed to only 11 verdicts which were anti-communist.

Warren’s actions negated the sedition laws of 42 states.  The government was not allowed to terminate employment of a federal employee even when it had been proved that they provided money and service to communist organizations.  Under the shield of “protecting citizens from intrusion,” the courts nullified Congress’ ability to question individual citizens regarding espionage and pro-communist activities.  Schools and colleges were unable to fire teachers and instructors who did not give information regarding their pro-communist activities.

Just in case this doesn’t sink in?  This period gave rise to the infiltration of communist ideology in our schools and universities…just prior to the 1960’s…the “formative” period of people such as the Weather Underground (Bill Ayers and Bernardine Dohrn, to name a couple), and their colleagues, such as Hillary Clinton and Al “Al-Jazeera” Gore.

By circumventing and destroying our existing laws and procedures, Eisenhower managed to create the current generation that is hell-bent on destroying the United States completely.

On March 5, 1954, Eisenhower signed a “Personal and Confidential” letter that ordered his cabinet to shield their employees from personal investigations by Congress regarding their loyalty and possible communist sympathies.  This was termed the “executive 5th amendment,” as the Department heads and not the individuals went before Congress to testify when an investigation presented itself.  There was a loophole regarding security files cleared by department heads that had previously had unfavorable observations by the FBI.  Eisenhower closed the loophole by Presidential Order on December 29, 1954 that placed all executive department security files “off limits” to congressional investigations.

In 1956, Hungary revolted against the Soviet Union and essentially “freed” itself for five days under the Imre Nagy Freedom Fighters, and the fighters requested diplomatic assistance from the U.S.  The assistance was never given.  Eisenhower refused to do anything about it except to refer the matter to the UN.  The five days were all that Soviet leader Nikita Khrushchev needed: he sent Mongolian troops in to crush the uprising.  Wholesale butchery occurred in Hungary and the capital of Budapest.  Three years later Khrushchev gave a speech in Budapest that if the U.S. had taken any action militarily or even diplomatically, Hungary would have been abandoned.

On November 4, 1956, the fighters in Hungary broadcast their last plea for aid, but it fell on deaf ears…Eisenhower’s ears, anyway, were deaf.  Eisenhower’s State department sent the following cablegram to Tito, dictator of Communist Yugoslavia on November 2, 1956:

From a U.S. perspective (Eisenhower’s perspective), the Hungarian revolt had failed even before it had begun, as that cable clearly shows how Eisenhower relegated them to their fate.  In July of 1959, Eisenhower invited Khrushchev to visit, and he did.  Khrushchev even visited Gettysburg and Eisenhower had his grandchildren photographed sitting on Khrushchev’s knee. Also in 1959, Fidel Castro came to power.  Eisenhower had been warned about it back in 1957 when Castro was barely visible.  Castro killed thousands of Cubans and was the USSR’s “firing platform” for nuclear missiles during the Cuban missile crisis.

In the space of 8 years, Eisenhower did a great amount of damage to the U.S., and in some ways even greater damage than Obama.  The measures that Eisenhower put into place…the strengthening of communist governments around the world, and the Chief Justice of the Supreme Court he emplaced that enabled communists to slither into the fabric of our society…crippled the U.S. for generations.  Eisenhower’s actions gave rise to Obama, Hillary Clinton, and their ilk: the dope-smoking, Marxist, anti-American liberals (self-termed “Community Organizers”).

These cretins have risen to positions of power and placed the U.S. literally on her deathbed.  The media has not merely been “obliging,” but they have been complicit.  Objective journalism has turned to journalism with an objective: to emplace pornography, deviant behaviors, and anti-Americanism to the forefront of the public consciousness, making these “anti-values” the new normative behavior.

The mainstream media of the United States has been, and is, attempting to destroy the United States through lies, disinformation, and an erosion of morals and culture to stultify and enable the subjugation and enslavement of the American people under communism and globalism.

Why should any Goldman-Sachs executive ever…ever…be allowed to dictate policy and take control of any financial institution or the administrative bureaucracies that regulate those institutions?  Why should Trump ever even consider such a person?  Why should Reince Previs, an open-borders/illegal alien amnesty proponent be in any cabinet position in the U.S.?  Why should campaign promises not be kept – and more – ruled that if campaign promises are not upheld then the candidate entered office by fraud and could immediately be removed from office?  This last question refers specifically to Obamacare and the promise that Trump made…the “parroted” expression, “Repeal and Replace.”

We don’t know just yet who we have ready to take charge of the White House.  We will not know until the inauguration is complete and action is taken.  The first 180 days will indicate the course of the first term.  History does tend to repeat itself, however, and unfortunately nobody can predict whether this man Trump will “clean up Washington” (much the same slogan that Eisenhower used, as mentioned earlier).  Trump was a Democrat once.  Trump campaigned as a Republican on the slogan “Make America Great Again.”  Let’s see if he does something to reverse things in the United States.  Let’s hope he doesn’t turn into another Eisenhower.