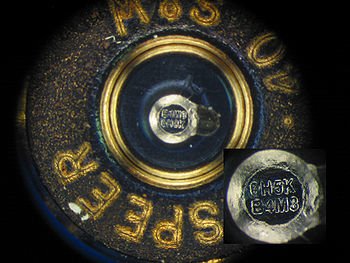 In a controversial move that some believe will essentially lead to a de facto ban on semi-automatic handguns, Attorney General Kamala Harris announced that, effective immediately, all new semi-automatic firearms sold in the State of California will require a unique microstamp on every shell ejected when a gun is fired.

Microstamping, or ballistic imprinting, is a technology patented in the 1990’s by engineer and NRA member Todd Lizotte. When a gun is fired, a tiny engraving on the firing pin etches a microscopic identifier onto the cartridge as it is expended by the firearm.

The law, which requires every semi automatic gun sold in the state to imprint the gun’s serial number on the cartridge, was signed into law by former California Governor Arnold Schwarzenegger in 2007 and was delayed due to patent stipulations in the legislation.

The legislation specified that it would take effect only when the technology was available and all private patents had expired.

But at a Los Angeles news conference Friday, Harris announced that micro-stamping had cleared all technological and patenting hurdles and would be required on newly sold semiautomatics, effective immediately.

“The patents have been cleared, which means that this very important technology will help us as law enforcement in identifying and locating people who have illegally used firearms,” Harris said.

According to proponents of the legislation, ballistic micro-stamping will help law enforcement investigators track down firearms used in the commission of crimes:

Attorney Benjamin Van Houten of San Francisco’s Law Center to Prevent Gun Violence said the announcement should send a message to other states, the Obama administration and the gun industry that “this is the future and it’s really critical to helping law enforcement solve gun crimes.”

Implementation of micro-stamping “moves California to the forefront of the nation in combatting gun crime,” said the law’s author, former Assemblyman Mike Feuer, D-Los Angeles, who attended the news conference and is running for city attorney.

It’s not clear exactly how a firearm that has been illegally purchased, such as through straw buyers who purchased semi-automatic rifles to Mexican drug cartels from federal agents in Operation Fast and Furious, could help track down criminals using untraceable guns in the commission of a crime.

In addition to being ineffective in tracking gun crimes, NRA attorney C.D. Michel suggests that with firearm sales across the country already putting overwhelming demand on gun manufacturers, the new California law could lead to widespread shortages of handguns in the state:

“This is not going to help solve crimes,” he said. “It’s easily defeated, easily wears out and can be used to lead police down false alleys” if the serial numbers are altered.

Worse yet, Michel said, manufacturers will be unwilling to add this expensive feature to guns sold in a single state, and will instead keep manufacturing weapons for the other states, where demand already far exceeds supply.

The effect, he said, would be a ban on new semiautomatic handguns in California, which the NRA will challenge in court.

As has been the case with California’s 1990’s ban on semi-automatic rifles and larger capacity magazines, the microstamping legislation aims to reduce availability of firearms to law abiding citizens. Because the legislation specifically targets semi-automatic handguns, a staple personal self defense firearm, the vast majority of those affected will be people who simply want to own a handgun to protect themselves and their families.

The law will have almost no effect on a criminal’s ability to gain access to firearms through the black market. This has been proven time and again with semi-automatic rifles and shotguns, which are already illegal in California but are regularly used by gangs and criminals.

It will also be the case with new micro-stamped handguns, which just like non-ballistically identified firearms, can be stolen and moved through back channels without restriction. If anything, criminals will prefer stolen micro-stamped guns over others because when police forensic teams show up, their investigations will be diverted to the original owner of the firearm, not to the criminal who stole it or purchased it through underground dealers.

And for those who think this is restricted to the left-coast, similar legislation is under consideration in New York, Connecticut, Rhode Island, Massachusetts, Maryland, Wisconsin, and Illinois. Likewise, a federal push for micro-stamping was attempted in 2008 by both the House and the Senate in the form of the National Gun Crime Identification Act.

Microstamping is yet another purported “common sense approach” that makes no sense in the real world.