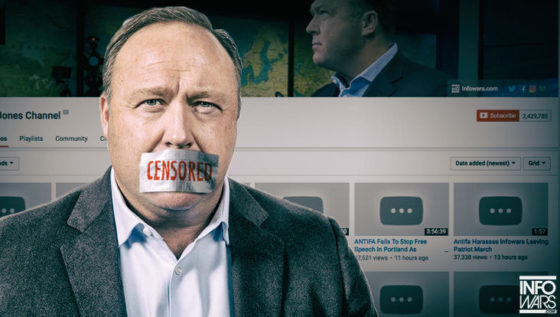 The banning of Alex Jones’ YouTube channel has just set a dangerous precedent for free speech.  Big tech has just proven they are no friend of free speech, by censoring those with whom they disagree while simultaneously proving Jones correct.

Jones had a large following on YouTube, about 2.5 subscribers. The owner and creator of InfoWars has often been derided by establishment media as a conspiracy theorist. Yet on Monday, Apple, Spotify, YouTube, and Facebook has actually proven the motto of his show correct: “There’s a war on for your mind!” By blocking or deleting InfoWars accounts from their platforms, saying he allegedly engaged in “hate speech” and violated their “community standards,” they’ve proven that they prefer the government approved official narrative to free thinking and free will.  Apparently, people don’t get to decide what information they are exposed to, Big Tech will do it for us.

As RT so eloquently put it: these corporations appointed themselves arbiters of acceptable political thought and censored Jones for failing to comply with arbitrary political standards set in Silicon Valley boardrooms, not at the ballot box.

Whether you like @RealAlexJones and Infowars or not, he is undeniably the victim today of collusion by the big tech giants. What price free speech? https://t.co/DWroGYaWvk

Banning and silencing Jones is setting a dangerous precedent reminiscent of Nazi Germany.  As RT continued to point out, the First Amendment to the US Constitution says that Congress shall make no law “abridging the freedom of speech, or of the press.” There is no “hate speech” exemption, either. In fact, hate speech is not even a legal category in the US. However, instead of demanding freedom for everyone, a chorus of voices all too glad Jones was purged immediately chimed up to argue that Apple, Alphabet, Facebook, and Spotify are private companies and this does not apply to them.

Civil rights activists such as the ACLU have argued that social media platforms amount to a “designated public forum” in cases where government officials tried to avail themselves of blocking, muting, and other functions put forth by Big Tech as a way to police “toxicity” on their platforms.

“When the government designates social media a public forum, the First Amendment prohibits it from limiting the discourse based on viewpoint,” the ACLU said in a brief submitted last year in a case before the Fourth Circuit Court of Appeals in Virginia. “When a government actor bans critics from speaking in a forum, it silences and chills dissent, warps the public conversation, and skews public perception,” the ACLU brief went on.

if social media platforms are a “designated public forum”that government is not allowed to exclude people from on First Amendment grounds, how is it OK for corporations that operate these platforms to do so? Or is chilling dissent, warping conversation and skewing perception only bad when a government actor does it, thereby creating a legal system in which the what is irrelevant, and the only thing that matters is who/whom? –RT