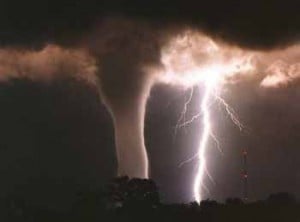 There is no hiding the fact that the global economy is now teetering on the real possibility of a complete meltdown – one that promises to be far worse than the financial crisis of 2008.

Dr. Doom Nouriel Roubini, often cited by mainstream and alternative analysts alike, says that we are now in the midst of the “perfect storm” he detailed at the 2012 Skybridge Alternative Conference in Las Vegas in which he forecast a world-wide economic “train wreck”. Among other things, Roubini warned that the United States would fall back into recession, stock markets would go into a tailspin, Europe would begin to break up, emerging markets – namely China – would experience major slowdowns, and military conflict in Iran would lead to further geo-political turbulence.

According to Roubini, that ‘Perfect Storm” scenario has now taken hold:

“The 2013 perfect storm scenario I wrote on months ago is unfolding,” Roubini said…

Roubini said that unlike in 2008 when central banks had “policy bullets” to stimulate the global economy, this time around policymakers are “running out of rabbits to pull out of the hat.”

“Levitational force of policy easing can only temporarily lift asset prices as gravitational forces of weaker fundamentals dominate over time,” he said.

It should be markedly clear that those green shoots which reportedly appeared to be sprouting in the summer of 2009 were nothing but conjecture promoted by governments and financial institutions in an attempt to maintain confidence and stability in the system.

That perceived stability will soon be overcome with a whirlwind of panic that could very well lead to a total destabilization of the economic, financial and geo-political systems as they exist today.

In the United States the signs are readily apparent.

Retail sales for the month of June have collapsed, with fully two-thirds of retailers in America reporting lower than expected sales numbers – the WORST sales numbers in three years.

Although there are no simple answers for the retail downturn,a lack of consumer confidence is widely believed to have been the driving force behind June’s dismal sales figures. “Consumers are holding back, cautious and losing confidence,” said IHS Global Insight economist Chris Christopher.

Employment isn’t fairing any better, with the US having created just 80,000 jobs last month, a far cry from the millions predicted by Vice President Joe Biden after President Obama took office in early 2009.

Americans and Europeans – the driving force behind global consumption – have no jobs, are out of money, and their credit cards are maxed out.

Record breaking numbers of Americans are on food stamps, prices for essential goods and services are continuously rising as inflation takes hold, and the only arrow left in the governments’s quiver seems to be to borrow trillions upon trillions of dollars just to make ends meet and pay the interest on our previous loans.

By all accounts, the entire system from top to bottom is completely broke and on the verge of insolvency.

Prepare for the next wave. It’s coming and it can’t be stopped.