Dr. Doom Explains How To ‘Short’ Central Banks When Public Confidence Collapses: “It’s The Only Way” 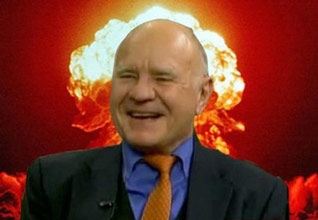 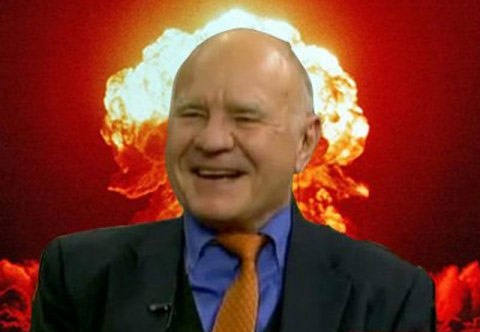 All over the world central banks are printing money. Trillions upon trillions of dollars, euros, yen and yuan are being injected into the global economy. The immediate effect, of course, is rising asset prices because most of that money ends up in the hands of private banking cartels that continue to manipulate financial markets world-wide.

And though their activities have given investors and the general public the perception of success, the reality is that we are in serious economic trouble. Otherwise, why would central banks need to forcibly keep interest rates near zero and continue to slam massive amounts of cash into equities and other markets?

It is for this reason that well known contrarian investor “Dr. Doom” Marc Faber suggests you start looking at a way to ‘short sell’ the actions of central banks. According to Faber, one day in the near future the people are finally going to realize that it’s all a sham and when they do the public will likely lose confidence in the ability of central banks and governments to effectively manage the economy. On that day all hell will break loose and very few investments will survive the fallout.

But Faber says if you position yourself for those events now, you’ll be just fine.:

“My belief is that the big surprise this year is that investor confidence in central banks collapses. And when that happens — I can’t short central banks, although I’d really like to, and the only way to short them is to go long gold, silver and platinum,” he said. “That’s the only way. That’s something I will do.”

“We simply have highly inflated asset markets. Real estate is high, stocks are high, bonds are high, art prices are high, and interest rates and short-term deposits are basically zero,” Faber said. “The only sector that I think is very inexpensive is precious metals, and in particularly precious-metals stocks.”

Though Faber recommends gold and silver as the investments that will survive the currency destruction and devaluations to come, precious metals aren’t the only investments he’s recommended in anticipation of a financial Armageddon scenario.

In his monthly Gloom Boom and Doom report he has suggested minimizing your dependency on the system because major financial and economic collapses often lead to serious consequences:

In addition to investment advice, Marc Faber also provides practical advice for those looking to preserve their well being. His advice is often looked at as a joke, but make no mistake, Faber is totally serious, even if he has a grin on his face when he says that the world as we know it is coming to an end.

In his latest GBD Report, Faber again advises those with the means to do it, to leave urban areas and seek safety in rural, country areas, preferably farms, and to be prepared to defend that land in the event the worst happens:

Faber has an interesting suggestion for investors if the plunge comes to pass.

With tongue apparently in cheek, he says buy a farm you can tend to yourself way out in the boondocks. And protect it with high voltage fences, barbed wire, booby traps, military weapons and Dobermans.

Faber, like many students of history, understands what happens when large economies and their systems of trade collapse.

“It’s going to end in a complete disaster. But, we have to distinguish – the disaster may not happen for five to ten years. But we’re heading into an iceberg. And, what will eventually happen is that the population will suffer very badly from inflation and declining real wages.” (Source)

In addition to rioting, looting, violence and revolution, Dr. Doom sees the ultimate worst-case scenario manifesting over the next several years:

“On another optimistic note, World War III will occur in the next five years. That means the Middle East will blow up. New regimes there will be less Western-friendly. The West has also figured out it can’t contain China, which is rising rapidly and will have more military and naval power in Southeast Asia. ”

Source: World War III Will Occur In the Next Five Years

And this is why, in addition to precious metals as a wealth preservation asset of last resort, you should be looking at invests that will prepare you for a wide array of scenarios, including widespread economic collapse and the real possibility of a global military conflict.

Precious metals are great, but there is a strong likelihood that should currencies collapse or war break out, there will be no immediate access to essential goods like food and medicine.

Tess Pennington, author of The Prepper’s Blueprint, suggests stockpiling long-term foodstuffs that include the 11 emergency foods that last a lifetime. Like gold, they can be purchased at a reasonable price today. And like gold, should it hit the fan, food will rise in value exponentially. Moreover, you’ll have it in your possession, to be used as you see fit, without the threat of “counter party risk” that exists when trading paper stocks and commodities.

And, as Faber has emphasized repeatedly in recent years, get out of major cities and become as self sustaining as possible:

That’s why I’m telling everybody, you ought to own some land… Because paper money and bonds are very vulnerable over the next five to ten years.

The Prepper’s Blueprint: Survive Any Disaster

Sustainable In The City

Build a One Year Food Supply In Three Months