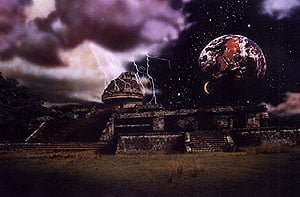 It looks like those preparing for the end of the world on December 21, 2012 may have some more time to get ready. According to a new report, the conversion from the Mayan calendar to the Gregorian calendar may have been conducted improperly, leading to a potential multi-decade miscalculation:

A new critique, published as a chapter in the new textbook “Calendars and Years II: Astronomy and Time in the Ancient and Medieval World” (Oxbow Books, 2010), argues that the accepted conversions of dates from Mayan to the modern calendar may be off by as much as 50 or 100 years. That would throw the supposed and overhyped 2012 apocalypse off by decades and cast into doubt the dates of historical Mayan events. (The doomsday worries are based on the fact that the Mayan calendar ends in 2012, much as our year ends on Dec. 31.)

The Mayan calendar was converted to today’s Gregorian calendar using a calculation called the GMT constant, named for the last initials of three early Mayanist researchers. Much of the work emphasized dates recovered from colonial documents that were written in the Mayan language in the Latin alphabet, according to the chapter’s author, Gerardo Aldana, University of California, Santa Barbara professor of Chicana and Chicano Studies.

The evidence to support the inaccuracies of the date, however, is disputed by other researches.

Whether the Mayan Doomsday date of December 21, 2012 predicts the actual end of the world, a new age of enlightenment or something else remains to be seen – and we’ll certainly know much more on December 22, 2012, so stay tuned for a follow up to this post in a couple years.

Of interest to those who are intrigued by the Mayan calendar are a couple of points worthy of mention.

Students of the Mayan calendar identified an important date within the calendar some time ago called the One Reed, Ce Acatal, which prophesied that an important ancestor would return, coming like a butterfly over the oceans. Incidentally, One Reed, Ce Acatal fell on April 21, 1519 which so happened to be the very day that Hernando Cortez arrived on the shores of the New Foundland – the Mayan Indians witnessed their arrival. Using this date as a benchmark would suggest that December 21, 2012 is still on target. Of course, the April 21, 1519 date may have just been coincidence, or described a completely different event than that which occurred.

In reference to December 21, 2010, the Mayans, well known for their study of the stars, may have foreseen a galactic alignment which occurs during the winter solistice every year. The difference with 2012, reportedly, is that the sun will be aligned unusually:

In the Horizon Project documentary, researches have determined that this rare alignment may lead to gravitational and electro-magnetic changes with the Earth as we move through what is commonly referred to in modern times as “the dark rift,” essentially the outstretched ripples from the super massive black hole believed to be located in the center of the Milky Way galaxy. Though we cannot predict what will happen, and many physicists dispute these claims, the Horizon Project suggests that movement through this Galactic rift could lead to a number of significant changes on Earth, including crust destabilization, Tsunamis, and rapid temperature changes resulting from what is referred to as a “pole shift” where the north and south poles of the earth actually switch place and shift. There is evidence for such events having occurred in the past, according to the Horizon Project team and they believe that such a scenario could occur again.

Interestingly, the Mayans’ December 21, 2012 prophecy is reported to also discuss the dark rift, referring to it as the “road to Xibalba” or “black road.” Some, but not all, researches postulate that the December 21, 2012 date is when the Mayans believed we could cross the black road. The end result? No one really knows, but if the Horizon Project research team is correct, an excellent visual example of what might occur can be found in the recent Hollywood mega-blockbuster movie 2012.

For an informative look at alternative geologic theory and potential dark rift impacts on the Earth, we highly recommend the Horizon Project documentary, which explores, among other things, the galactic alignment, potential gravitational and electro-magnetic effects on earth, historical civilization doomsday events, and evidence to suggest that everything you’ve ever learned about Pangea is totally wrong: