Don’t Get Cold Feet: When the Economy Tanks, the Value of Gold May Briefly Plummet 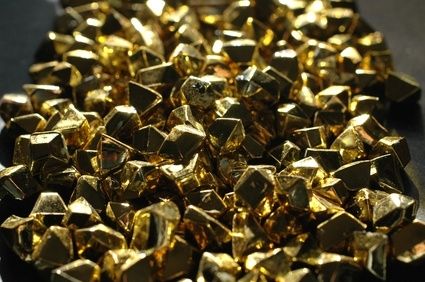 You’ve probably heard the following advice a thousand times already: Precious metals are safe haven assets. When a financial system crumbles, everyone moves their money out of the stock market, or any other risky asset, and they buy gold. Since our financial system is burdened with so much debt and is teaming with bubbles, its collapse is all but inevitable. So you should buy gold now while it’s still relatively cheap.

Despite my tone, I assure you that what I’ve said is still sound advice. However, there’s a small detail about safe haven assets like gold that most people forget. Sometimes, when the economy takes a nosedive, it takes gold down with it. Take a look at what happened to gold during the last financial crisis. 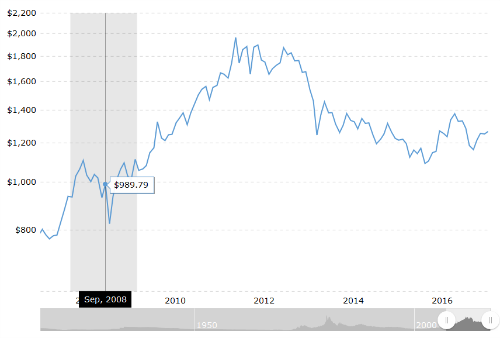 That shaded part represents our last recession. As you can see, when the recession started everything went according to plan. Investors fled their typical financial haunts, and bought gold. But it soon began to lose value. In August and September of 2008, the price of gold plummeted to less than what it was before the recession. This event coincided with the stock market crash that also occurred in August of 2008. 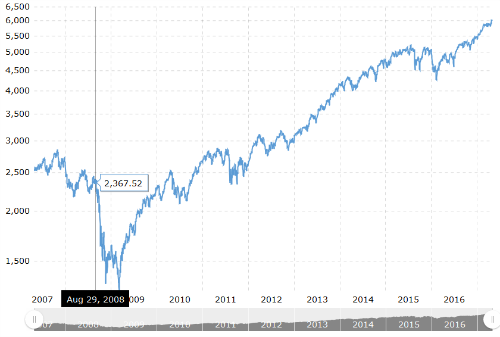 So what happened? Why did investors abandon gold; an asset that so many people revere as a lifeboat in hard times? It’s probably because, despite the dire nature of our economy at the time, the value of the dollar began to soar in July and August of 2008. 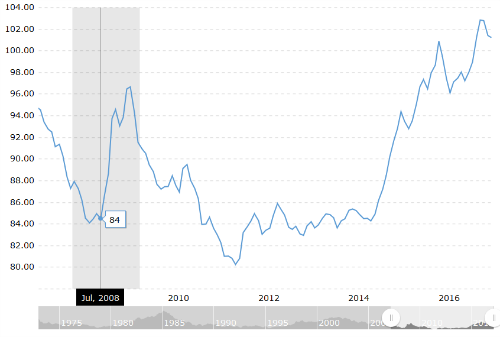 The dollar wasn’t a great investment at the time, but its value increased because it was still better than so many other assets. It was the lesser of many different evils.

I bring this up because people who buy gold need to understand that while precious metals are considered safe haven assets, they’re not immune to serious dips, even when everything is going to hell in a handbasket. I tell you this, because I don’t want you to panic when the next financial crisis hits, and sell all of the gold you bought to protect yourself in the years that preceded the crisis.

So don’t lose your cool when the next financial crisis arrives. You know that the economy is a house of cards, and you know that unless we witness some kind of Mad Max apocalypse, gold is going to be one of the safest assets to hold when the house of cards comes tumbling down. And you know that this crisis is inevitable. So ride out the fluctuations in the market, and don’t get cold feet.