Does Your Plan B Include a Second Place to Live If Plan A Doesn’t Work Out? 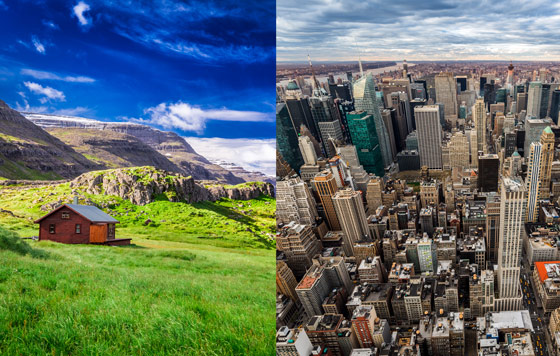 This article was originally published by Charles Hugh Smith at PeakProsperity.com

We all have a Plan A—continue living just like we’re living now.

Some of us have a Plan B in case Plan A doesn’t work out, and the reasons for a Plan B break out into three general categories:

The Fragility and Vulnerability of Highly Optimized Supply Chains

Many people are unaware of the fragility of the supply chains that truck in food, fuel and all the other commodities of industrialized comfort to cities. As a general rule, there are only a few days of food and fuel in a typical city, and any disruption quickly empties existing stocks.  (Those interested in learning more might start with the book When Trucks Stop Running: Energy and the Future of Transportation.)

Most residents may not realize that the government’s emergency services are actually quite limited, and that a relatively small number of casualties/injured people (for example, a few thousand) in an urban area would overwhelm services designed to handle a relative handful of the millions of residents.  Authorities can call up the National Guard to maintain order, but the government isn’t set up to provide food and fuel to millions of people stranded by a natural disaster or a ”Black Swan” (unexpected disruption).

To reduce costs, supply chains and other essential systems have been stripped of redundancies—any break in the optimized flow has the potential to cripple the entire system. Since these highly optimized systems work so well most of the time, we don’t really understand the vulnerabilities that lurk just below the surface of “just in time” deliveries and other efficiencies.

This inherent fragility has long fueled interest in rural “bug-out” retreats, a topic I recently addressed in Having A ‘Retreat’ Property Comes With Real Challenges.

Where Do We Go When the Economy Falters?

For the past eight years, US politicians and Federal Reserve authorities have attempted to repeal the classic business cycle of growth, stagnation, recession and renewed growth.  It may appear they’ve succeeded, but the era’s slow growth has been sustained by unprecedented expansions of debt in the government, corporate and private sectors.

This extraordinary expansion of debt has been enabled by a decline in interest rates. Most observers with a sense of history view these extremes of debt expansion and near-zero interest rates as unsustainable and destabilizing: 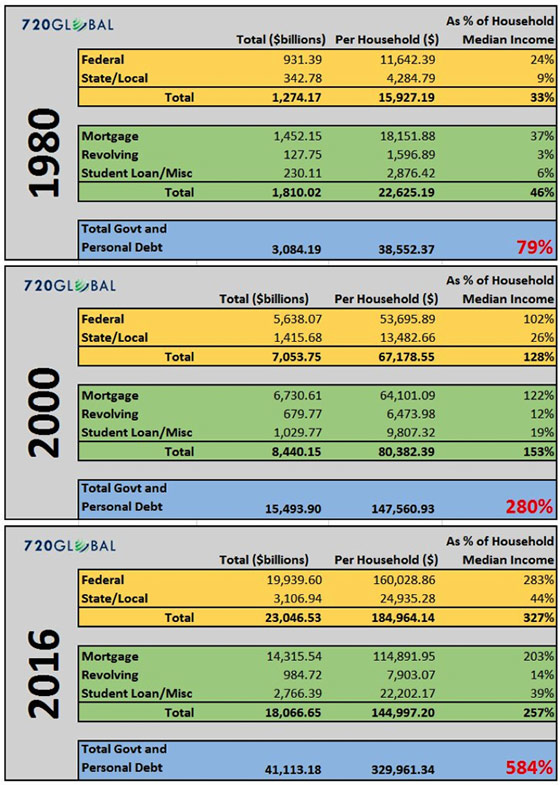 In other words, extending the expansion cycle by extreme policy measures cannot actually repeal the business cycle; rather, these policy extremes increase the likelihood that the eventual recession will be deeper and/or longer than it would have been absent the policy extremes.

Thus we can anticipate a recession of some sort, in which mal-investments and unpayable debts are liquidated and written off, and credit expansion (and the consumption that depends on it) slows or even reverses, as it did in the 2008-09 recession.

Employers must lay off employees when sales and profits fall, and as incomes fall, sales fall further, creating a feedback loop of mutually reinforcing declines in household income and spending.

When the music finally stops, many laid-off employees won’t be able to find a chair (i.e. another job).  Without a job, most people can’t afford to remain in high-cost urban centers for long.

When the 2000 recession gutted employment in the San Francisco Bay Area, 100,000 people moved away.

Recent immigrants to wealthy metro areas have the option of returning home to the village or town they’d left to seek work in the city.  Many immigrants from south of the border have invested their earnings in building new homes in their villages of origin. When the economy north of the Rio Grande falters, they can return to the home they built when their incomes were high.

In China, many of the urban workers laid off in slow periods return to their villages, where there is a source of food (farms) and a roof over their head (the family home).

Today’s “rootless Cosmopolitans” (urban dwelling Americans) typically lack a village they can return to in hard times. So a common Plan B is to seek an equivalent low-cost place to retreat to in recessions.

Where Do We Go When We Burn Out?

There’s a simple phrase that embodies the exhaustion and dissatisfaction we experience when we feel like we’re on a treadmill going nowhere that’s speeding up: Burn-out.

As Historian Fernand Braudel (and others) observed, cities have always had a higher cost of living than the countryside—and offered higher pay scales. Cities aggregate capital, talent and power, and while this dynamism serves to raise many out of poverty, it can also exacerbate wealth and income inequality.

The globalization of labor and capital combined with the aforementioned policy extremes has deepened the divide between “haves” and “have-nots” in many urban regions. Those who bought their homes in desirable metro areas for $150,000 are much wealthier now that these modest homes fetch $750,000 or more. Young people with conventional jobs will never be able to afford these home prices, and so the time-honored source of middle-class security—home ownership—is out of reach.

Many of those who dove in and bought a home are stretching to pay crushing mortgages, soaring taxes and higher costs for healthcare and childcare. They are burning out, and their Plan B is a permanent move to a less burdensome and more fulfilling life elsewhere.

While the serious prepper with a “bug-out” Plan B might be planning for the long haul, others will view their “bug-out” Plan B preparations as a temporary arrangement—a place to go in the event of a natural disaster such as an earthquake or hurricane, or localized social unrest.

Such a temporary home-away-from-home could be as simple as an RV parked in the parents’ driveway, a spare room in a relative’s house or more elaborately, a storage shed turned into a “tiny house.”

Those planning for the eventuality of a much lower income due to recession will have a much different Plan B, as they need dirt-cheap housing for an extended occupancy that might last from a few months to as long as a few years.

The recession Plan B must include planning for childcare/schooling, healthcare, employment/earning a living—all the day-to-day components of Plan A.

The recession Plan B also has to account for the possibility that the return to the Plan A lifestyle will no longer be an option due to health issues, the decline of the sector of employment, or permanent declines in household income.

The burn-out Plan B is intended to be permanent. Plan A is being replaced by a Plan B that must provide the essentials of home, work and community—what I call fully functional residence.

In Part 2: The Benefits & Challenges Of Maintaining A Retreat Property, we present our framework that clarifies the trade-offs, costs and benefits of owning and maintaining a Plan B “retreat” property. There is no “one size fits all” solution to a retreat property — selecting and operating one needs to be custom tailored to your own individual requirements, resources, skills and risk assessment. Using our framework, we’ll help you zero in on the factors that make the most sense given your personal situation.

Maintaining a functional separate retreat residence is a responsibility that comes with real costs and complexities. But if done right, it can yield great returns during both good times and bad.