DHS To Purchase 62 Million More Rounds Of AR-15 Ammo: “They’re Going to Control How Much Ammo is Available” 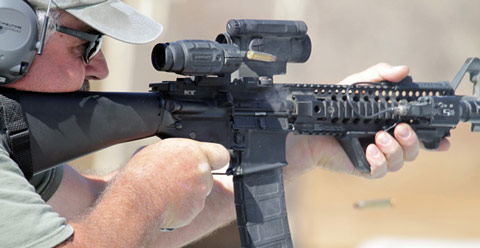 The Department of Homeland Security is set to purchase over 62 million rounds of ammo typically used in AR-15 semi-automatic rifles, just weeks after the ATF was forced to back down on a ban on M855 bullets.

A posting on FedBizOpps.gov this week reveals that the DHS is looking to contract with a company to provide 12.6 million rounds of .223 Remington ammunition per year for a period of five years – totaling 62.5 million bullets.

The solicitation explains that the purchase is intended, “to achieve price savings over the current .223 Rem duty ammunition.” The bullets will be used by U.S. Customs and Border Protection agents nationwide for “training” purposes.

The .223 Remington is one of the most common rifle cartridges in use in the United States and is used both in bolt action rifles and semi-automatic rifles such as the AR-15 and the Ruger Mini-14.

In 2013, following concerns about the DHS buying large quantities of several different types of ammunition, weapons manufacturers noted that the feds may have been attempting to control the ammunition market by forcing manufacturers to hold back stock from general sale.

“If they periodically do this in increments, they’re going to control how much ammo is available on the commercial market,” a weapons manufacturer told Michael Savage, adding that the contracts with bullet manufacturers stipulate that everything made goes to the government as the number one priority before it is allowed to enter the commercial market.

In March 2013, Californian Congressman Doug LaMalfa and 14 of his House peers wrote a letter to the Department of Homeland Security demanding to know why the federal agency was buying so many rounds of ammunition and whether the purchases were part of a deliberate attempt to restrict supply to the American people.

“The extraordinary level of ammunition purchases made by Homeland Security seems to have, in states such as my own, created an extreme shortage of ammunition to the point where many gun owners are unable to purchase any,” LaMalfa wrote in the letter.

The bulk purchase follows attempts by the Bureau of Alcohol, Tobacco and Firearms to ban M855 ammo, another popular round for AR-15’s used by hunters. The ATF justified the ban by claiming that the bullets were “armor piercing” and a threat to law enforcement officers.

After being on the receiving end of a huge backlash, the feds were forced to back down and ATF director B. Todd Jones subsequently tendered his resignation. Democratic Congressman Steve Israel called the ATF backdown “cowardly” and vowed to revive the ban.

The ATF’s threat to ban the ammo temporarily caused prices of the bullet to surge more than double in price.

Although federal agencies are increasingly hiding their purchases by limiting public information on fbo.gov, it can still be conservatively estimated from available data that the feds have purchased at least 2.11 billion rounds of ammunition since April 2012:

That’s enough ammo to kill around 30% of the world’s population.

Furthermore, U.S. soldiers were shooting around 5.5 million rounds of ammunition per month during the war in Iraq, or 66 million rounds annually. Using that figure, the feds have stockpiled enough ammo over the past two years to fight a 32-year war.

Kit Daniels also contributed to the bottom of this article with an update.