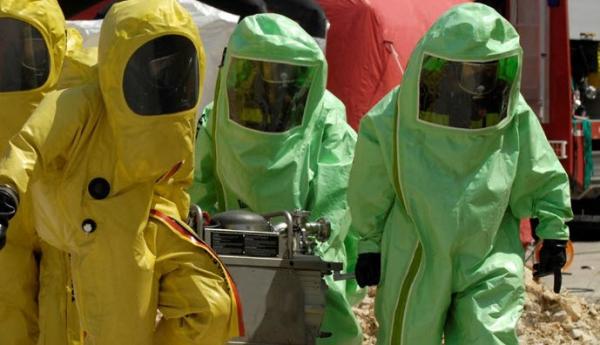 The Department of Homeland Security (DHS) is preparing to simulate ‘biological attacks’ on critical infrastructure near the border between Kansas and Oklahoma. The first round of drills will occur on January through February of next year, along with the second round in the summer.

For some time, we have been documenting the increased drills, the United States Government is actively preparing for or underway in a field training exercise. More recently, the Department of Defense just conducted a drill simulating a total grid collapse across the United States. Days ago, Wisconsin released plans on an upcoming drill to stimulate a grid collapse for mid-November. We find it strange the United States Government is drilling for apocalyptic scenarios, but provides very limited details to the American populace. It’s not strange and we’ll tell you why, if the public ever found out about the true nature of these drills it would lead to chaos. So frankly, most Americans will be left out of the dark of what’s coming…

The first drill starts in January and continues into February of next year at two buildings within the Chilocco Indian Agricultural School (Chilocco campus) in Newkirk, Kay County, Oklahoma. The location is about 6-miles south of Arkansas City, Kansas. Department of Homeland Security (DHS) Science & Technology Directorate (S&T) plans to release low-levels of inert chemicals and biological stimulant materials simulating a biological attack on critical infrastructure. S&T is studying the penetration capabilities of a biological stimulant against resident buildings.

DHS’s strategical goal for the operation is to “detect and recover from biological attacks and inform and support biodefense planning, response, and restoration, particularly in consequence/risk assessment modeling of the indoor hazards posed by outdoor aerosols”.

Google image of the Chilocco Indian School and surrounding land.

DHS Science and Technology Directorate (S&T) explains the types of  “biological stimulant” that will be released during the exercises..

Testing will be conducted through the release of (2) different inert powders as well as barcoded spores and are meant to simulate the behavior of harmful biological materials as they move from the outdoors into buildings.

The inert powders are 1) titanium dioxide (TiO2) and 2) urea powder mixed with 10% Cl Fluorescent Brightener 220 optical brightener. Both types of powders allow for the gross mapping of particle penetration into the different building types. TiO2 is a chemically inert powder commonly used in paints, food, cosmetics, and insecticides. Urea is the main chemical found in human and mammalian urine and is used throughout the world as a fertilizer. Optical brighter is a chemical whitener added to toothpastes and laundry detergents to increase fluorescence. For this study the optical brighter is added to the urea, to increase particle visibility for detection, at a weight percent of < 10%.

Part of the test is to determine how much protection occupants inside the residential structures will receive amid a biological agent attack. Test description as follows,

In the event of an outdoor biological agent attack, it is currently unknown the extent to which hazardous material will penetrate buildings and homes in the vicinity of such attack. Current models use a Building Protection Factor (BPF) to describe the permeability of a building to particulates in an outdoor biological attack. The BPF is defined as the reduction in dose received by a typical building occupant compared to a person located outside the building. An unprotected building will typically have a BPF of slightly above 1.2 In the DHS Bioterrorism Risk Assessment (BTRA), BPF values assigned are from 0-1 as a fraction, with 1 being most the most protective, but little to no experimental data exists to support these values. This project would further advance preparedness by providing improved estimates of the boundaries and levels of contamination in homes and buildings following an outdoor aerosol release of a biological agent under varied conditions. UML will release materials upwind of select buildings and experimentally determine the amount of material that penetrates the buildings. The data collected would facilitate modeling efforts that support response and recovery decisions and actions by local, state, tribal, and federal emergency managers.

Tentative quantities and release schedule for the drill:

Hiding on page 22/55 of the report, the building’s characteristics are said to resemble residential and apartment buildings within the United States. Here are additional characteristics of what DHS was looking for:

Local Republican U.S. Rep. Ron Estes of Kansas is not too fond of DHS’s drill and said last Thursday he is “monitoring the situation closely”.

“I have numerous questions regarding this proposed test,” Estes said. “While it’s important for our federal agencies to test their abilities in response to threats, we need to be 100 percent certain this test is safe for the residents of south-central Kansas.”

Bottom line: As millennials continue to urbanize America-moving out of their parents basements into multifamily complexes with the dreams of enjoying avocado and toast every morning for breakfast. There is a far deeper problem-jeopardizing the millennials’ city-life narrative and the Department of Homeland Security (DHS) is preparing for it: ‘biological attacks’ on apartment buildings…