Democrats Vote To Give Illegal Immigrants The Right To Vote

Update: House Democrats voted Friday to defend localities that allow illegal immigrants to vote in their elections, turning back a GOP attempt to discourage the practice. As The Washington Times reports, the vote marks a stunning reversal from just six months ago, when the chamber – then under GOP control – voted to decry illegal immigrant voting.

“We are prepared to open up the political process and let all of the people come in,” Rep. John Lewis, a Georgia Democrat and hero of the civil rights movement, told colleagues as he led opposition to the GOP measure.

“It sounds like I’m making it up. What kind of government would cancel the vote of its own citizens, and replace it with noncitizens?”

As we detailed earlier, using carefully chosen words in what appears an attempt to hide the truth, House Speaker Rep. Nancy Pelosi admitted this week at a news conference on voting rights with Rep. Lloyd Doggett (D-Texas) in Austin, Texas on Tuesday, that Democrats want illegal immigrants to be able to come into the nation freely, across their open borders, in order to rig elections for the Democrats. 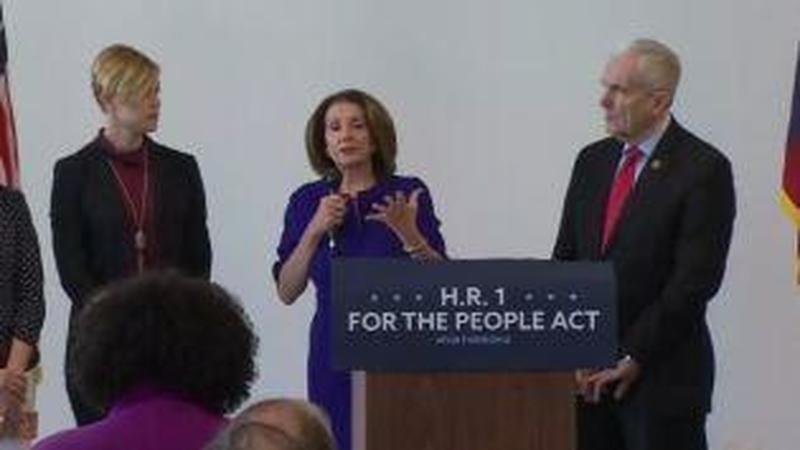 As CNSnews.com reports, Speaker Pelosi spoke on the importance of passing H.R. 1, the “For the People Act of 2019,” “to lay the foundation to pass the Voting Rights Act, strengthened after the actions of the Supreme Court, which significantly weakened it,” she said.

.@SpeakerPelosi – We Should Not Be ‘Suppressing the Vote of Our Newcomers to America’ #tcot #ccot #TuesdayThoughts #TuesdayMotivation https://t.co/kTKwondtvL

Specifically, Pelosi said immigrants “make America more American,” and we should not be “suppressing the vote of our newcomers to America.”

“So, when we talk about newcomers, we have to recognize the constant reinvigoration of America that they are, that we all have been – our families,” Speaker Nancy Pelosi said.

“And that, unless you’re blessed to be Native American – which is a blessing in itself that we respect – but that constant reinvigoration of hope, determination, optimism, courage, to make the future better for the next generation, those are American traits. And these newcomers make America more American. And we want them, when they come here, to be fully part of our system. And that means not suppressing the vote of our newcomers to America.”

She then quoted former President Reagan out of context to support her argument:

“In the campaign, the candidate that I, the president that I quoted the most was Ronald Reagan. Does that surprise you? Maybe. But Ronald Reagan said this: ‘This is the last speech I will make as President of the United States. And I have a message I want to communicate to the country I love.’ He went on to talk about the Statue of Liberty and what it means to the world – that beacon of hope, what it means to people who have come here and seen that statue welcoming them – he said, our ancestors, our grandparents, our parents.”

As President Trump’s son Donald Jr noted: “And there it is folks. What we all knew but no one would say. It’s only about votes for Democrats. “

Additionally, we note that friend-of-AOC, Rep. Ayanna Pressley may have outdone Pelosi with her latest stunt, an attempt to lower the federal voting age to 16.

“I am honored & excited to be introducing my very 1st amendment on the House floor, an amendment to #HR1, the #ForthePeopleAct. My amendment will lower the voting age from 18 to 16, allowing our youth to have a seat at the table of democracy. #16toVote,” she said.

I am honored & excited to be introducing my very 1st amendment on the House floor, an amendment to #HR1, the #ForthePeopleAct. My amendment will lower the voting age from 18 to 16, allowing our youth to have a seat at the table of democracy. #16toVote pic.twitter.com/67IzCtUh8k