Democrats Go There: Invoke 25th Amendment Unless Trump “Gets A Grip” 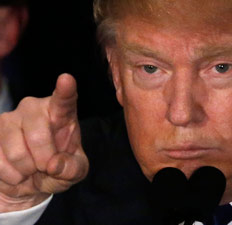 After questioning President Trump’s sanity earlier in the week, it appears Democrats have found another narrative to cling to – invoke the 25th Amendment unless Trump “gets a grip.”

Rep. Earl Blumenauer (D-Ore.) in a floor speech this week called for a review of the Constitution’s procedures for removing a president. He warned the 25th Amendment of the Constitution falls short when it comes to mental or emotional fitness for office.

Sen. Al Franken (D-Minn.) during a weekend interview with CNN’s “State of the Union” said that “a few” Republican colleagues have expressed concern to him about Trump’s mental health.

And Rep. Ted Lieu (D-Calif.) plans to introduce legislation that would require the presence of a psychiatrist or psychologist in the White House.

Justifying their questions by pointing to Trump’s habit of making demonstrably false claims.

“It’s not normal behavior. I don’t know anybody in a position of responsibility that doesn’t know if they’re being rained on. And nobody I work with serially offers up verifiably false statements on an ongoing basis,”

In fact, The Atlantic’s David Frum joked after the election, “Twenty-Fifth Amendment to the Constitution. Article 4. We’re all going to be talking a lot more about it in the months ahead.”

So, what’s Article 4 to the 25th Amendment? In the abstract, the amendment itself is about presidential succession, and includes language about the power of the office when a president is incapacitated. But Digby recently highlighted the specific text of growing relevance:

What does that mean exactly?

Well, it means Congress isn’t the only institution that can remove a president from office between elections. Under the 25th Amendment, a sitting vice president and a majority of the executive branch’s cabinet could, on their own, agree to transfer power out of the hands of a sitting president. At that point, those officials would notify Congress, and the vice president would assume the office as the acting president.

And what if the challenged president wasn’t on board with the plan to remove him/her from the office? According to a recent explainer, “If the president wants to dispute this move, he can, but then it would be up to Congress to settle the matter with a vote. A two-thirds majority in both houses would be necessary to keep the vice president in charge. If that threshold isn’t reached, the president would regain his powers.” All of this comes up in fiction from time to time, and in all likelihood, Americans will probably never see this political crisis play out in real life. And that’s probably a good thing: by all appearances, the intended purpose of the constitutional provision was to address a president with a serious ailment – say, a stroke, for example – in which he or she is alive, but unable to fulfill the duties of the office.

In other words, for the first time, the concept of a “soft palace coup” has been officially brought up on public media; we expect such speculation will only get louder.

The ball is now in Trump’s court.