This article was originally published by JD Heyes at Natural News under the title: “Democratic” South Korea Set To Adopt China-Style Mass Surveillance System To “Track COVID” – Is this coming to America? 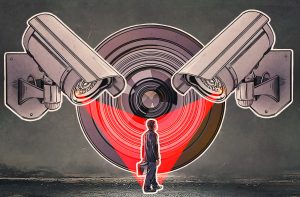 Once again, the leaders of a “democratic” Western-style country are using the COVID-19 pandemic to implement authoritarian control measures over their people, and it’s going to be control they’re never going to peacefully let go of.

South Korean health officials, with the blessing of the country’s government, is “set to launch in January will test the tracking of citizens with artificial intelligence (AI) and facial-recognition software, via several thousand CCTV surveillance cameras scattered throughout the bustling city of Bucheon, just outside Seoul,” The New American reported.

The system aims to monitor the movement and activities of around 800,000 citizens, an official told Reuters. The program is designed to identify COVID-19-infected residents, who they come into contact with, and how often they put on a mask.

TNA noted that the system is not yet scheduled to extend to the entire country, but it is being hailed as a means of reducing the workload of human coronavirus contact tracers.

Though it isn’t clear how infected residents will actually be identified — perhaps through an existing database or one the government plans to create specifically for the system — the city of Bucheon is actually funding the project, along with “the very Orwellian-sounding Ministry of Science and ICT (Information and Communications Technology),” the outlet reported.

What’s even clearer is that this system isn’t necessary: The country has only recorded 4,456 COVID-related deaths since the pandemic began; throughout South Korea, there have only been about 536,500 cases out of a population of some 52 million people. And here’s another reality: “In a country where citizen surveillance is encouraged and supported by the majority of the population, it is not likely to receive much pushback from the people,” the outlet reported.

A Brookings Institute report from 2020 notes that South Korean authorities have implemented nationwide surveillance for other purposes as well, including tax fraud:

Even before the COVID-19 outbreak, the Korean government collected massive amounts of transaction data for investigating tax fraud. Literally, every credit card and bank transaction in Korea is recorded on government databases. During the outbreak, this information was repurposed to retroactively track where people went: not just coffee shops and restaurants, but also buses and subways (the latter two mostly paid for by cashless tools). For patient #10422, such transactions would have revealed visits to the supermarket and burger joint, allowing authorities to quickly quarantine and sterilize both locations.

The system being set up in Bucheon has been declared legal by the Korea Disease Control and Prevention Agency, “as long as it is used within the realm of the disease control and prevention law.”

Fortunately, TNA added: “Some lawmakers, however, are attempting to halt the project’s roll-out, citing invasion of privacy concerns.”

One of them, Park Dae-chul, a member of the conservative People Power Party, told Reuters that “the government’s plan to become a Big Brother on the pretext of COVID is a neo-totalitarian idea.

“It is absolutely wrong to monitor and control the public via CCTV using taxpayers’ money and without the consent from the public,” Park added.

City officials say that citizens have to volunteer to take part in the surveillance system and those who choose not to do so won’t be monitored. And perhaps in South Korea, government officials can be taken at their word.

But we know that in America, we have a deep state government intelligence/surveillance apparatus that doesn’t care about, and is not limited by, the Constitution’s privacy protections and other provisions designed to protect individual liberties. So such a system, were it to be implemented in the U.S., will definitely be abused, and mostly by Democrats.

“The party told you to reject the evidence of your eyes and ears,” George Orwell warned, noted TNA, noting further: “In a free democratic nation, this is really happening.”

This technology is available in America, too. We wouldn’t be surprised if it’s not already being tested.