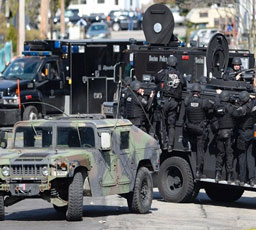 There’s no doubt that domestic law enforcement agencies on every level have been ramping up their militarization efforts in recent years. In fact, it’s gotten so bad that it has prompted Senator Rand Paul to call for a demilitarization of domestic police departments. “The images and scenes we continue to see in Ferguson resemble war more than traditional police action,” notes Paul in a recent article.

We know that the Department of Homeland Security has been buying up billions of rounds of ammunition, military grade rifles, armored vehicles, riot gear and a host of other supplies. But local police stockpiles have remained fairly hidden from the public, save for the brief peeks we get during mass policing actions like those in Ferguson, Missouri over the last week.

But if you’re interested in what your local county has been stockpiling compliments of The Department of Homeland Security, a database from the military’s Defense Logistics Agency can help.

The Law Enforcement Support Office, under the 1033 program authorized by the National Defense Authorization Act, helps local police departments obtain military equipment for use in their cities. As reported by The Detroit Free Press, over 8,000 participating agencies have taken advantage of LESO offerings from the U.S. military and DHS since the program’s inception:

This law allows for the office to transfer excess Department of Defense property to law enforcement agencies across the United States and its territories.

Since its inception, the 1033 program has transferred more than $5.1 billion worth of property.

Simply choose your State and your County and you’ll have complete access to see how well militarized your local and county police departments are.

Click here to launch the database in a new window for easier viewing.
(Secondary Link to Database Here)

You may or may not be surprised to find everything from mine resistant vehicles and grenade launchers to night vision goggles and high powered assault rifles.

As an example of the heavy militarization efforts of domestic law enforcement agencies, The Detroit Free Press utilized the LESO database to see what Michigan police have been up to in recent years:

James Quinn of The Burning Platform did a similar investigation into his local area and found that cops in his county of Montgomery, Pennsylvania now have a $733,000 mine resistant vehicle and a $245,000 armored personnel carrier. “I sure hope they will be able to clear all the land mines in my upper class suburban county,” notes Quinn.

The U.S. government has long been war-gaming large-scale economic collapse scenarios and civil unrest simulations, leaving many Americans wondering if they know something we don’t.

Use the LESO database above to find out what they’ve been stockpiling and what you can expect to see in your local neighborhood if the worst happens.