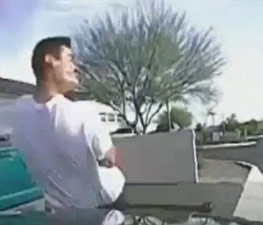 The following shocking footage out of Arizona was captured on police dashcams and shows suspect Mario Valencia walking down the street carrying a firearm. Police were trailing the suspect who had allegedly been on a crime spree all morning and had stolen a rifle from Walmart earlier in the day.

As police move in on the suspect he discharges his firearm, leading two squad cars to slow down. One officer can be heard providing details as the incident unfolds, warning others that the man is armed, locked and loaded:

Have units be prepared… stand off, stand off… the gun is loaded… stay off.

As he slows down another patrol car can be seen speeding into the seen from his right, striking the suspect and sending him flying.

“Oh, Jesus Christ – man down,” he screams as he realizes what happened.

This was the scene from a first-person perspective:

The following footage was taken by the dashcam in the car of the officer providing incident details and shows a different perspective:

While it’s not often that you see a police officer slam his vehicle into a suspect, the fact is that the man was armed and had already shown that he was prepared to fire his handgun with total disregard for public safety. Moreover, he had been tracked by police throughout the day for crimes he’d allegedly committed. 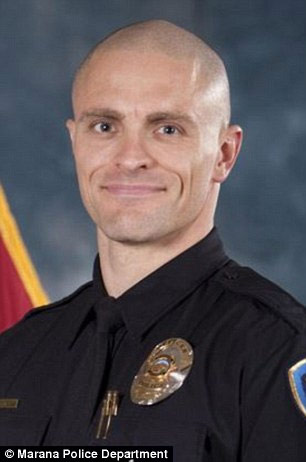 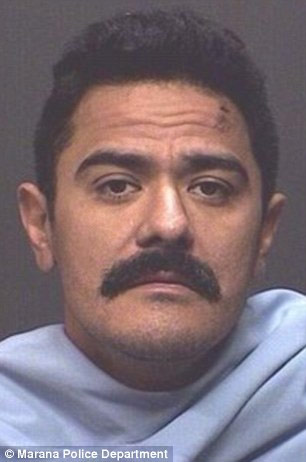 The man survived his injuries. He was arrested and charged two days later.

KOLD-TV reports that an investigation supports the action of police:

‘This was a dangerous felon who’d been on a crime spree throughout the morning.

‘He’d just stolen a weapon, loaded it, was not obeying commands from officers and was walking toward occupied businesses .It’s a busy time of morning, a lot of employees at work.

‘We had to take immediate action and make sure he didn’t get inside those businesses.’

With all of the negative press for police departments recently, especially with videos depicting the total lawlessness of some police officers, this one seems to show that the public was served and protected.