Crash Indicator: Mom and Pop Take the Plunge Back Into Stocks For Fear of “Being Left on the Sidelines”

Their concerns aren’t centered around the possibility of an economic collapse, another down leg in the real estate market, continued deterioration of the labor market, or a US dollar currency meltdown.

With markets at all time highs and financial experts around the world predicting a turn-around in the global economy, a lot of “Mom and Pop” investors who experienced major losses in personal investment funds and home prices during the crash of 2008 are starting to worry, but not for the reasons you might think.

What’s on the minds of many Americans who have sat by watching Wall Street mavens and traders walk away with huge gains over the last four years is that they aren’t getting a piece of the action.

The market’s record-breaking spree has raised a new fear in many American households—dread that they are missing out on big gains.

When stock prices collapsed in 2008, the bear market wiped out half of the savings of Lucie White and her husband, both doctors in Houston.

Feeling “sucker punched,” she says, they swore off stocks and put their remaining money in a bank.

This week, as the Dow Jones Industrial Average and Standard & Poor’s 500-stock index pushed to record highs, Ms. White and her husband hired a financial adviser and took the plunge back into the market.

“What really tipped our hand was to see our cash not doing anything while the S&P was going up,” says Ms. White, a 39-year-old dermatologist in Houston. “We just didn’t want to be left on the sidelines.”

Ms. White and her husband, Mark Villa, a reconstructive surgeon, are joining other individual investors in overcoming their fears after watching stocks recover all the ground lost during the financial crisis and more.

The story goes that a wealthy financier named Bernard Baruch was having his shoes shined one fine morning in 1929. As the final rag and polish were being put on his leather Oxfords, Baruch’s shoeshine boy, aware of his Wall Street reputation, began sharing stock tips and providing him with a financial news summary of the previous day’s events. Legend has it that Baruch promptly returned to his office, called his firm’s senior broker and ordered him to sell everything. The broker, no doubt shocked, questioned the decision.

Baruch reportedly replied, “when shoe shine boys are giving out stock tips, it’s time to get out.”

Whether it’s buy recommendations from cab drivers and shoeshine boys in 1929, real estate agents touting never-ending home price gains in 2007, or friends and colleagues discussing all time stock market highs and economic recovery in 2013, there is often ample warning that markets may be acting irrationally.

While some Americans remain concerned about the possibility of another recession, depression or full-on economic collapse, there are a lot of folks out there who can no longer sit idly by watching Wall Street institutions and traders make out like bandits while their money loses purchasing power to inflation.

They see 15,000 points on the Dow Jones or a 10% rise in their condo price and assume the recession is over and the boom cycle is back in full swing, never taking the time to consider the machinations that have made it possible.

They see government reports claiming the unemployment rate is under 8%, but they fail to understand that the calculations don’t include millions of Americans, some estimates suggest as many as 23% of the working population, who are no longer counted by modern day statistics formulas.

They see mall parking lots full of cars, but they have no idea that some of the largest retailers in the country are reporting year-over-year sales declines and that American savings rates are dwindling.

They see European finance ministers in Cyprus seize up to 40% of private bank deposits, but assume that whatever is going on over there is too far away to affect anything here in the United States.

They see $17 trillion of national debt, but have no idea how much money that really is, the fact that the arithmetic proves we’ll never pay it back, or what the implications are when we can’t make good on our debts.

They see their friends, colleagues and family calling their financial advisers and jumping back into stocks without realizing that insiders and institutions are divesting their positions.

Most people have no idea that the government has not only war-gamed economic disaster scenarios and the civil unrest that would follow, but that they are actively militarizing law enforcement agencies across the country to deal with such events should they come to pass.

The shoeshine boys and mainstream pundits are out in force, espousing the benefits of getting back into stocks and ensuring that you don’t miss the next wave up.

When average individual investors start plunging back into stock markets in droves, especially at historical highs, your Baruch alarm bell should be going off.

“Taxi drivers told you what to buy. The shoeshine boy could give you a summary of the day’s financial news as he worked with rag and polish. An old beggar who regularly patrolled the street in front of my office now gave me tips and, I suppose, spent the money I and others gave him in the market. My cook had a brokerage account and followed the ticker closely. Her paper profits were quickly blown away in the gale of 1929.”

-Bernard Baruch describes the scene before the crash of 1929

It’s time to get out. 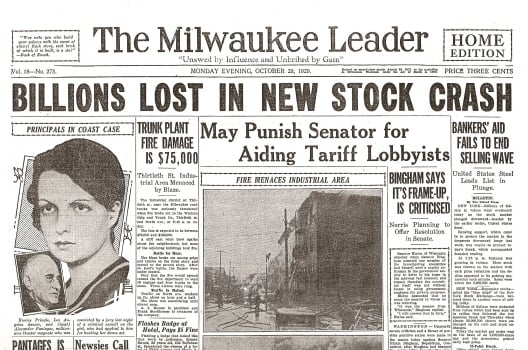