Covid PsyOps Are Now Being Used for Climate Change 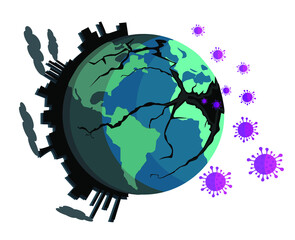 As the eco-zealot group, Just Stop Oil continues to break the law and cause mayhem, perhaps it is time to investigate who is pulling the strings of this and other fake grassroots movements. Even a cursory glance will make it clear that the people behind it are not everyday members of the public but a group of highly influential American billionaires.

In a four-part series published by The Conservative Woman, Stephen McMurray demonstrates how psychology and money – not facts – are driving the climate alarmist narrative in the UK.  As well as by “independent” groups of psychologists, these psychological tactics are being deployed by the UK government based on a document produced by the Environment and Climate Committee.  The notorious Covid false narrative duo, Chris Whitty and Patrick Valance, are on this committee.

Stephen McMurray is a member of Free Speech Union. What follows is a brief summary of McMurray’s articles, you can read the four articles in full by following the links provided:

Most of the focus has been on the Gettys but it is Neilson who has the most interesting background. After university, he worked as an intern in the White House when Bill Clinton was president. Later he worked for the newly formed Bill and Melinda Gates Foundation as Director of Communications and also acted as the Gates’ personal spokesman. Neilson was also a member of the Clinton Global Initiative, the Council of Foreign Relations, and one of the Young Global Leaders for the World Economic Forum.

On the current advisory board members of the Climate Emergency Fund, we see more of the usual themes and ideologies that have nothing to do with the climate but are warmly embraced by the climate crisis zealots.

If you think Margaret Klein Salamon is an oddity amongst psychologists, think again. Numerous psychologists are now boarding the climate crisis gravy train. There is an organization called the Climate Psychology Alliance. Like Salamon, they wish to use their expertise in the field of psychology to nudge people into believing in their worldview of climate-induced, impending doom.  This group overtly states that “facts” aren’t really persuading people that the climate crisis is real and that they need to use psychology to pressure us all to become true believers:

It is now widely accepted that facts and information about the risk of climate change, taken, alone, do not promote change. There is a growing acceptance that the climate change movement could be enriched by incorporating deeper psychological perspectives. But mainstream positivist psychology is often part of the problem, especially when it reduces the human being to an object to be measured, controlled and then harnessed to the profit-making machine that now threatens our collective future.

They even say that climate anxiety is a good thing:

So, deep down, climate anxiety is a good thing because it is needed to awaken people. But strong anxiety is not pleasant, and if there is not enough climate action and psychosocial support, many forms of climate anxiety become problematic and there will also be much climate depression.

Therefore, it is beneficial to cause members of the public great distress by telling them the world is about to end, just so long as there are enough psychologists (who traumatized them in the first place) to help them cope by getting them involved in climate action where they too can traumatize others and keep the chain going. What an ingenious way to help destroy people’s lives whilst making lots of money in the process.

It is not just individuals these groups want to target, but corporations as well. An organization called Climate Psychologists offers consultancy courses to companies.

More than ever companies need to remain agile as they transition towards sustainability … Our HR platform delivers workshops, coaching, psychological support and behavioural change programmes to foster wellbeing in the workplace and goal orientated action.

What we do, Climate Psychologists, retrieved 13 November 2022

Above is the current wording which has been edited since McMurray wrote his article. As noted by McMurray the website previously stated:

Now more than ever companies need to remain agile as they transition towards sustainability. Our climate psychologists deliver workshops, coaching, psychological support and behavioural change programmes to foster containment and responsiveness in uncertain times . . . Discover the power of “Ethical Nudges” to deliver positive effects for your team, and your company – in the office and in the world.

Notice that they aren’t just offering support to employees traumatized by the “climate crisis,” but are using behavioral change programs and ethical nudging. They are telling employers how to subtly manipulate the minds of their employees to believe in the climate emergency. This is very reminiscent of the government’s SPI-B behavioral insights team that used psychology to terrify people into accepting Covid lockdowns.

Last month the House of Lords Environment and Climate Change Committee published a report entitled ‘In our hands: behavior change for climate and environmental goals’.

It is a sinister document in which the government openly state that all aspects of our life need to be managed to lessen the impact of climate change and that mind control techniques, very similar to the ones used to force the public into acquiescing to Covid lockdowns, need to be used against the population.

Chris Whitty – one of the main instigators of the disastrous Covid policy – is on the committee that produced the document and another Covid collaborator, Sir Patrick Vallance, was a witness.

In their opening summary, the committee makes it clear every government department will be required to use psychology as a weapon against the public to ensure we behave in line with what the climate alarmists demand.

Further into the document, it is made clear that not only are all government departments to be targeted but the private business sector as well, even if it is not in their financial interest to do so.

To emphasize just how much they want to control the minutiae of daily life, one of the key points the committee make is:

Priority behaviour change policies are needed in the areas of travel, heating, diet and consumption to enable the public to adopt and use green technologies and products and reduce carbon-intensive consumption.

And, as the report points out, it is not just businesses they are trying to use to make you change your behavior. They also want to use charities and religious institutions to control the minds of the masses.

It is evident that the climate alarmists, with the backing of billionaires, psychologists, and the government, are waging a war on the minds of the people to bring about the Great Reset dystopia. They have the power and the money on their side, but clearly, due to having to resort to mind control techniques, they don’t have the truth. As George Orwell is reputed to have said: ‘In the time of universal deceit, telling the truth is a revolutionary act.’

It’s time we all became revolutionaries because the truth is that it is not the climate crisis that is the biggest threat to our wellbeing, but the climate crisis alarmists who want to remove the last vestiges of our freedom and plunge us into a never-ending Dark Age.