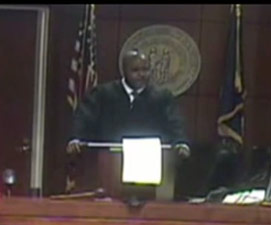 The victims of an armed robbery are outraged after a Kentucky judge let a convicted home invader go free, only to be lambasted by the court for racism in their victim statement.

On March 21, 2013 two armed black men entered the home of Jordan and Tommy Gray. Their 3-year old daughter was watching television. The men held the family at gun point and robbed them.

The case should have been straight forward. In fact, one of the men has already been sentenced to 10 years in prison.

But Greg Wallace, who pleaded guilty to the robbery, made off much better than his accomplice. And many believe it is because of a statement given to the court about the effects the robbery had on the victims’ young daughter.

Jordan Gray told the court that her daughter was experiencing symptoms of post traumatic stress disorder over the incident and that every time the little girl saw a black man she was terrified. The experience, according to her parents, made it difficult for the little girl to interact with African American friends, and has affected some relationships with family friends.

“This incident has had the most impact on my daughter.”

“She is in constant fear of black men. When we are running errands, if we come across a black male, she holds me tight and begs me to leave. If (she) is playing in a room and I walk into another, she freaks out. It has affected her friendships at school and our relationship with African American friends.”

The statement was offered to the court in good faith, but Judge Olu Stevens didn’t see it that way. Instead, he vented his frustration at the parents for racism, while letting the armed home invader go free.

But when Wallace was brought up for sentencing Feb. 4 in Jefferson Circuit Court, it was the parents, not Wallace, who suffered Judge Olu Stevens’ wrath.

“I am offended… I am deeply offended that they would be victimized by an individual and express some kind of fear of all black men,” he said.

“This little girl certainly has been victimized, and she can’t help the way she feels,” he said. “My exception is more with her parents and their accepting that kind of mentality and fostering those type of stereotypes.”

The Grays were not in court as Stevens denounced their statements and granted probation to Wallace, whom he said deserved the opportunity to redeem himself.

“It troubles me greatly what this statement says,” he said at Wallace’s sentencing. “I would want to make that part of the record, I am offended by that.”

“If the perpetrator had been white, would they be in fear of white men?” he asked.

“It’s not going to affect what happens here,” he said, but “I’m going to make this part of the record.”

The response from Jordan Gray was what you might expect given that it seems the Judge took more time to scold the family than he did the criminal who threatened them at gunpoint.

“If holding a little girl at gunpoint gets you probation, then our system is flawed,” Gray said.

The court’s release of Wallace was met with heavy criticism almost immediately but that didn’t stop Judge Stevens, who took to Facebook to defend his actions (or lack thereof) by claiming that the victim’s statements had no impact on his decision to set Wallace free.

“Do three year olds form such generalized, stereotyped and racist opinions of others?”

“I think not. Perhaps the mother had attributed her own views to her child as a manner of sanitizing them.”

“As for my “wrath”, I had none. I leave wrath to the Commonwealth’s Attorney and others disgruntled by the ultimate decision. I did not criticize the child. I cautioned the parents against racial stereotyping

(His Facebook post has since been removed as of this writing, presumably because the Judge realized the idiocy of his statement)

@judgeolustevens Your decision was clearly racial and shows why you need to be removed.

@judgeolustevens you’re pathetic. If roles were reversed how would it have played out? You’re a racist dirtbag

@judgeolustevens This man needs to be fired. He is not able keep his personal opinions separate from his responsibilities as a judge.

@judgeolustevens your personal feelings don’t matter .If you are offended tough shit . That makes you a BAD JUDGE !

Wrath or not, the fact that Judge Olu Stevens set a convicted criminal free, and one who literally could have killed the family during the commission of his crime, while castigating the victims of said crime is ridiculous. One can only surmise that his obvious anger towards the victims played some role in his decision to set Greg Wallace free so that he can go back out into the world and “redeem himself”.

It shouldn’t be long before Wallace is back in court, however, because anyone who would hold a 3-year old at gun point should not be walking the streets. Let’s just hope that no one ends up dead the next time he decides to kick in a peaceful family’s door and put a gun in their faces.