Could This Be How Americans Are Still Spending Money?

Granted, we’re nowhere near the levels of individual consumer spending1 we saw in the heyday of the real estate and stock bubbles, somehow, some way, Americans are still able to afford all of the gadgets, dinners out, and good times of yesteryear.

The following chart from the Federal Reserve may explain how this is happening. It’s something we’ve implied over the last couple of years with anecdotal evidence, but this is proof positive that the consumer is now down to the wire, trying to maintain some semblance of the life they led before the greatest depression took hold: 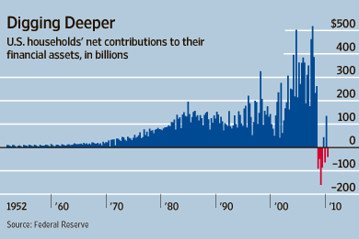 This chart depicts the inflows – and in the case of recent years, the outflows – for individual financial assets like personal investment and savings accounts for the last 60 years.

One thing is perfectly clear: Americans are spending their hard earned savings at an unprecedented rate.

Over the two years ending September 2010, Americans withdrew a net $311 billion â€” or about 1.4% of their disposable income â€” from their savings and investment accounts, according to the Federal Reserve. Thatâ€™s a sharp divergence from the previous 57 years, during which they never made a net quarterly withdrawal. Rather, they added an average of 12% of disposable income to their holdings of financial assets â€” including bank accounts, money-market funds, stocks, bonds and other investments â€” each year.

Saving is now a thing of the past. As Americans continue to live the illusion (or perhaps, delusion) that the economy is the same today as it was in 2005, we’re having to dip into savings to maintain the lifestyles to which we’ve all become accustomed.

To be sure, a good portion of those withdrawals are a direct result of our unofficial unemployment rate topping 22%, as well as rising costs for essential goods like food and energy, but some of those savings are likely making their way into the economy via the purchases of discretionary and luxury items like consumer electronics, new cars and family vacations. If a retailer can’t provide the credit, what choice does a consumer have but to hit the money market account to make sure they can watch the Super Bowl on a new 3D HDTV?

Our economy may be faltering, and people may be going broke and hungry, but some will never give up the dream until every last penny is spent. Afterall, America and the rest of the world couldn’t possibly be on the brink of a catastrophic economic collapse.

As prices for commodities continue to rise, jobs remain non-existent and the majority of people hold on to the idea they can over consume with reckless abandon, we can expect that the historical inflows to savings-based accounts will remain outflows for years to come.

Hat tip Tom of the North