Crypto Currency Calm Before The Storm: “Governments Are Studying It To Find The Means To Take Control Of It… And You” 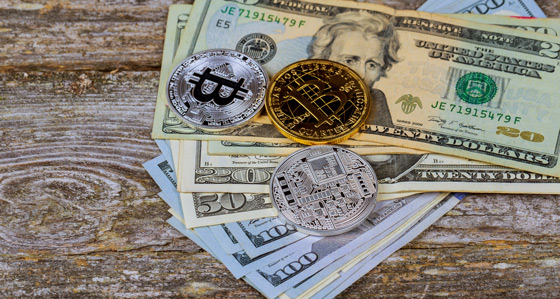 The United States (and the world) has been using the worthless fiat federal reserve note that is not backed by any true tangible asset.  The only backing is not even the “full faith and credit of the United States government,” because the government is too far in debt to have any credit.  Faith disappeared a long time ago: our faith in elected officials as public servants.  Instead, they serve themselves upon the labors of the public, and the public services them, in every sense of the word.

Cryptocurrency is an illusion.  The new “shell game” is to replace one illusion…the fiat currency…with another illusion, the “bitcoin.”  Russia announced last week several measures to “deal” with the Cryptocurrency…first, by issuing a Crypto-ruble.  If you read the fine print, the Russian government is moving in to tax and regulate it, at a rate of 13% on trades for profit, as well as “Crypto-Rubles” that suddenly appear out of nowhere.

It won’t affect the Black Market as much, because 13% is going to be paid to turn a blind eye to the billions of rubles being stolen by the Russian Mafia and oligarchy alike.  The gimmick here is for the government to take a chunk out of it: for now.  The reason “now” is being used, is that eventually they’ll shift gears, pass legislation, and eventually outlaw private trading in it that is not government-sanctioned or government-approved.

A government is only concerned with perpetuating itself and maintaining power.  The most basic way it does this is by controlling the currency of the nation, regulating it, and taxing the citizens.  In the United States, it has been reported by several sources that JP Morgan Chase is going to embrace Cryptocurrency.  Europe is well on its way to establishing a “Euro-BitCoin,” and China has recently relaxed some measures regarding it.

This is the calm before the storm: the governments are studying it, and studying the masses to find the means to take control of it.

The gullible masses are playing right into their hands.  The problem with Cryptocurrency is not just in the fact that it is backed by nothing (a fool’s errand before it has been started), but there is no privacy.  None.  If the governments control and monitor all electronic and computer media, then there is no such thing as privacy regarding electronic currency.  This will be the death of cash, and thus the death of any privacy for citizens.

There will be no hiding from the taxing authorities.  All the accounts will be monitored: taxed on any growth, and every single penny accounted for.  The government will know what work you do, for how much, and how much “Crypto-currency” you have in your accounts.  All electronic, nebulous, unbacked garbage.  How about a nice “glitch” where suddenly, your entire account falls to a zero balance?  That “glitch” can happen anytime.

No, the politicians and the oligarchs will have gold, silver, real estate, mining rights and contracts, and ownership of every utility and municipal function upon which the public is dependent.  Eventually the Crypto-Dollars will be handed out sparingly to “exchange for food, clothing, and to pay their bills,” and the whole thing is designed for one thing:

To keep the population at a starveling, subsistence level while those in power own everything, and them as well: Ruled by the politicians and oligarchs, fooled by the press and the religious pulpits, and killed by the enforcement arms of police and military.

In 1910, the meeting on Jekyll Island, Georgia took place leading up to 1913.  It was then that the framework for the transfer of the power of the U.S. government over the nation’s currency to the federal reserve was established.

“The real truth of the matter is, as you and I know, that a financial element in the larger centers has owned the Government ever since the days of Andrew Jackson.”

Once each nation has its Cryptocurrencies in place, they can “align” them, and virtually abolish all economic buffers and barriers…which will come crashing down just as the illegal aliens in Europe and the United States are destroying the borders, language, culture, and societies.  The whole thing is trumpeted as a recourse, but it is nothing more than an extension of an Alinsky principle “organizing the organized.”  At the right moment, the governments will swoop in, regulate, and tax these Cryptocurrencies.

Once cash is eliminated, hard assets such as gold, silver, and other resources will be simple to control.  Where did you obtain that gold?  How did you obtain it, and is it in our records?

The power lies in the receipt, the payment receipt showing where you obtained that product and how you obtained it…all based on POS (point of sale), the electronic monitoring of every expenditure at the register.  The “successful” employment of Cryptocurrency will mean that the people have been completely duped and have handed all privacy into the control of the government.  Once they control everyone economically, they will use that control to seize other aspects of daily life that are not regulated.  They’ll know how much you make, where you work, and how much you have available.

Or what you think you have available, because in the blink of an eye, they’ll make your Crypto dollars disappear, and you’ll have no recourse, just as they have no accountability.  If politicians steal money now, while cash still exists, think of how much they’ll be able to steal when everything is done electronically…when all the bankers and oligarchs are under their control/in a symbiotic-parasitic relationship and they can pass any law they wish.  Cryptocurrency is a scam that will eventually lead to the final enslavement of the U.S.