An important thing to remember during this financial crisis is that it’s not just the federal government that has mismanaged the public’s money by taking on too much debt and entitlement promises like social security and medicare which it simply cannot service. Like the central planners in Washington D.C., many of our states are also in trouble, namely because of social service programs like state health care and state pension funds.

Over the last several years many state pension funds have experienced massive declines and because we’re nowhere near the finish line, we can expect even more destruction as stock invested pensions get decimated in coming months and years. This means that the states will be incapable of making payments not only to pensioners, but they’ll be forced to either make massive cuts in essential services like emergency response and government administration, or borrow money from the federal government – probably both.

Here’s how the states fared in a recent study:

The Pew Center on the States, a nonpartisan think-tank based in Washington D.C., recently used California as the poster child for fiscal dysfunctionality. The Pew Center identified the six factors most responsible for California’s ongoing fiscal woes and then scored the other 49 states on how similar they are to the beleaguered Golden State.

The six factors are (1) high foreclosure rates; (2) increasing joblessness; (3) loss of state revenues; (4) relative size of budget gaps; (5) legal obstacles to balanced budgets — specifically, a supermajority requirement for some or all tax increases or budget bills; and (6) poor money-management practices. The results are in the table below, with California being assigned theÂ benchmark number of 30. 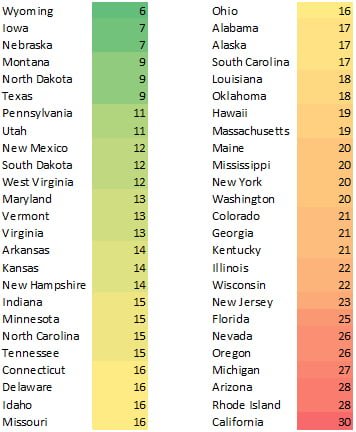 If you’re a resident of one of the most troubled states in America, here’s a glimpse of what’s to come: higher taxes, layoffs of state workers, longer waits for public services, more crowded classrooms, shorter school years, higher college tuition and less support for the poor and the unemployed.

But for those of you living in places that aren’t in such rough shape, don’t get too comfortable. Think about this: The 10 states in the worst financial condition account for more than one-third of America’s population and economic output.

The health of individual states is important because the United States’ recovery from the Great Recession depends heavily on the degree to which states emerge from their economic doldrums. But the actions needed to repair finances in the 10 most vulnerable states — think higher taxes and lower government expenditures — could slow down the entire nation’s economic recovery.

Lower wages, high unemployment, increased taxes and more economic woes are almost a guarantee going forward. Regardless of what we’re told is being done to quell the situation, it is clear that nothing has actually been done.

It’s only going to get worse. No bureaucrat in Washington or your state capital is prepared to do what’s necessary, so they will continue to kick the can down the road until the road dead ends.

How long will this be?

It’s hard to say, but in terms of the states, we’re likely looking at sooner rather than later. States are already broke, with California, Illinois and New Jersey already showing serious fiscal strain. In the near future we’ll begin seeing states requesting bailouts directly from the federal government. Eventually, we suspect that the majority of states will be standing in the welfare line looking for hand outs.

For now, the US dollar remains fairly strong given our economic problems. In fact, any time a financial emergency spreads across the globe, investors seem to be running to US bonds for safety, so there is still confidence in the US government’s ability to service our existing debt.

However, we believe that once the states begin to require federal involvement to pay government workers, emergency responders and pensioners, we will be much closer to a serious collapse of not only our economic system, but the monetary system as well. It’s only a matter of time before the rest of the world realizes that we’re completely broke and takes action accordingly.

The states blew a government spending bubble, and that bubble is about to pop. The federal debt bubble will not be far behind.