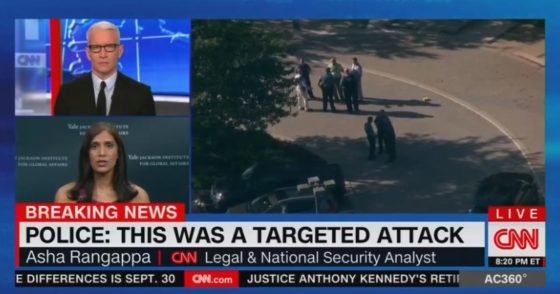 CNN’s Asha Rangappa blamed Donald Trump’s rhetoric for the shooting of journalists at the Capital Gazette in Annapolis yesterday despite the fact that the gunman’s vendetta against the newspaper stretched back seven years and had nothing to do with Trump.

Almost as soon as the shooting was reported, and with zero knowledge of the gunman’s motive, mainstream press talking heads began blaming Trump’s anti-media rhetoric.

Prime amongst them was CNN legal and national security analyst Asha Rangappa, who suggested that Trump’s “dangerous rhetoric” could have been a motivating factor.

“Just to relate this back to kind of a bigger conversation that we’ve had this week about civility and rhetoric, you know, lone wolf actors are often alienated individuals who are looking to displace their anger and frustration onto some kind of outside entity or enemy, and I think it’s worth pointing out that we’ve had a constant rhetoric coming even from the President that the press is the enemy of the people, that’s been repeated constantly, and I think it’s worth noting if there is a link here that the publication was being targeted that that kind of rhetoric can be very dangerous in these times,” said Rangappa.

The insinuation that Trump’s rhetoric was somehow to blame for the shooting is completely inconsistent with the facts.

The gunman sent a tweet minutes before the attack making reference to the judge who dismissed his 2012 lawsuit against the Capital Gazette.

It quickly emerged that Ramos was pursuing a vendetta against the newspaper, having sued them for defamation over a 2011 article in which they reported on his conviction for criminal harassment.

In other words, Ramos’ vendetta stretched back at least seven years, and at least four years before Trump even announced he was running for president. His motive had no connection to Trump whatsoever.

Numerous other leftists also rushed to blame Trump for the shooting without waiting for the facts to come in.

The shooting today in the Capital Gazette newsroom in Annapolis, Maryland cannot reasonably be separated from the President’s mission to villainize the press as “the enemy of the American people.”

I’m getting my oil changed in Maryland watching local coverage of the #Annapolis shooting. I teach journalism students. The anti-press rhetoric of the right & the president can’t be separated from this violence

We’re hoping this is a spree killing by a disgruntled man with easy access to deadly weapons like we see every week and have decided to accept as normal, bc the alternative is that it’s a Trump-endorsed vigilante attack on the press.

Question for President @realDonaldTrump – Has today’s shooting of #journalists in #Annapolis caused you to reflect on past statements labeling the media the “enemy of the people” #FakeNews and the “opposition party”?https://t.co/V0OSDzV0Ay

There will be thoughts and prayers. Silence from many politicians. No action. And in comment threads, a lot of our neighbors, co-workers and relatives will say anonymously that reporters deserved it b/c they’re “fake news”, “lamestream media” and so, “enemies of the people.” https://t.co/qjEWZnTK10

Journalist Michael Tracey summed up the entire farce when he tweeted, “The alleged shooter had a deranged, obsessive grudge with this particular newspaper dating back years. Condolences to everyone desperately disappointed to find that they can’t connect this to their favorite national political narrative. You’ll have to wait till the next shooting.”

The alleged shooter had a deranged, obsessive grudge with this particular newspaper dating back years. Condolences to everyone desperately disappointed to find that they can’t connect this to their favorite national political narrative. You’ll have to wait till the next shooting