Chuck Schumer Admits: Trump Is About To Be Impeached “Without The Facts Coming Out” 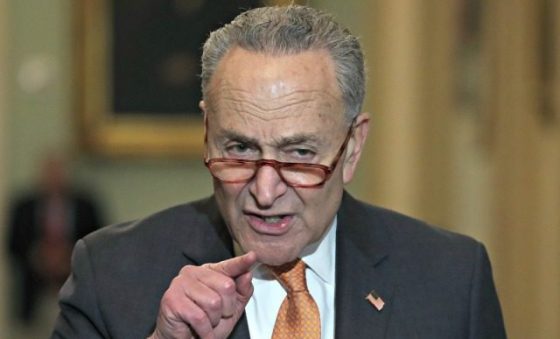 Democrat Senator Chuck Schumer admitted Tuesday that President Donald Trump is going to be impeached “without the facts coming out.” Schumer accidentally let the truth slip out when trying to violate 200 years worth of impeachment precedent.

Schumer has openly admitted that the impeachment case coming from the U.S. House against President Trump is one “without the facts.” And yet, the House Democrats are going to go ahead and impeach the president anyway, reported Breitbart News.

What Schumer is pushing for is testimony from people the House did not bother to get testimony from, including former national security adviser John Bolton and acting White House chief of staff Mick Mulvaney, as well a couple of others. But he’s not requesting Hunter Biden testify about his corruption.

Schumer’s attempt to get more witnesses to testify is simply an admission that they don’t have enough facts and evidence to impeach the president.

Believe me, if the House had produced anything resembling a prosecutable case, Schumer would not be asking for the unprecedented right to keep digging for evidence against Trump, and would sure not be admitting that this is an impeachment “without the facts.”

Had the House respected precedent, respected due process, and not turned itself into a kangaroo court determined to impeach Trump before Christmas regardless of the facts, they would have waited for the courts to decide on the separation of powers issues regarding the subpoenaing of these witnesses.

Instead, they not only rushed to impeach Trump without charging him with a crime, without a shred of evidence he engaged in any wrongdoing of any kind, they are charging Trump for obstruction because he sought relief from the courts, which is one of the most obscene and un-American things Congress has ever done.

It’s become clear that Democrats don’t have much of a case here, because if they did, Schumer wouldn’t be making this last-ditch effort to get the public on his side.