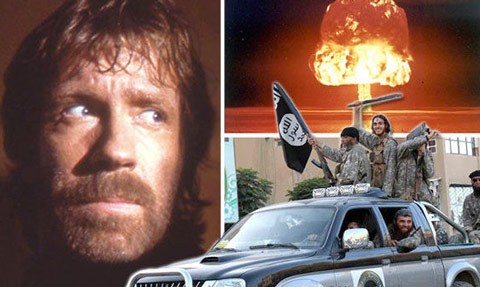 If you know anything about Chuck Norris (or his alter ego Walker Texas Ranger), you know that he’s not one to take things lying down.

Just look at what happened over the summer when, after a number of Texans got worried about the US Spec Ops Command’s Jade Helm 15 “exercises,” Norris warned The Pentagon that the drills came “a little too close to the backdoor of [his] ranch.”

A few months later, after Norris became “exhausted” with Tehran’s nuclear “antics”, Walker suggested that if he were allowed to speak for and act on behalf of the entire international community, the Bahamas would never obtain a nuclear weapon, Iranian drug dealers would never be given a 90-day heads up to hide their stash, and most importantly, Iran’s nuclear ambitions would be “sniffed” out and “pre-emptive strikes” would be launched.

Well, in the wake of the Paris attacks, Norris is out with a new missive titled simply, “World War III?”

In it, we get a history lesson, a quantitative assessment of Islamic State’s power vis-a-vis other Sunni extremist groups, and all sorts of semantic shenanigans. Below, find some highlights and commentary.

...if you weren’t convinced before, now you know what a disorganized World War III looks like from the six simultaneous Paris terror attacks by ISIS that killed at least 129 precious souls and injured more than 300 more. And to think just a year ago, President Obama called ISIS “a jayvee team.” In fact, on Friday morning just before the attacks in Paris, President Obama again minimized ISIS’ power as he shared on “Good Morning America,” “I don’t think they’re gaining ground. What is true is that from the start, our goal has been first to contain, and we have contained them. … We’ve [also] made some progress in trying to reduce the flow of foreign fighters…”

We’re not sure what a “misdirected miscalculation” is, and the word “convinced” doesn’t work with the phrase “now you know”, but Norris is correct that Obama had a rather unfortunate soundbite on Good Morning America and we think we understand what Chuck is trying to say. But just so we’re sure, let’s see if he can clear it up:

I believe these coordinated murder sprees in Paris may go down in history like the Nazis’ invasion of Poland on Sept. 1, 1939, as the spark that lit the fuse for a wider European involvement in World War II. Though apples and oranges in warfare, the impact of ISIS in Syria and Iraq is comparable to Hitler’s annexation of Czechoslovakia and Austria, which caused great concern and condemnation but not greater European revolt.

Ok, got it. ISIS taking territory in Syria and Iraq is a lot like Anschluss and the German occupation of Sudetenland. You see, late 1930s Germany was a rising industrial and military powerhouse capable of annexing entire states by decree. Much like ISIS, a ragtag group of desert bandits operating out of bombed out cities in the war-torn Middle East.

But hey, at least Norris admits their style of warfare is “apples to oranges.”

It took the closer invasion of Poland to provoke a military battle from France and Great Britain. So, I believe, ISIS’ attacks on Paris will prompt Western nations and others to coalesce against ISIS like never before, especially for those countries whose victims lie among the dead and injured.

Well, on that point we’d have to agree, although we think Chuck may be missing a thing or two when it comes to understanding the real motivation for Western troops going to Syria.

The expansion of ISIS’ footprint is undeniable. The jihadists possess a hundredfold the power of al-Qaida and, in their own estimation, are well on the way to Caliphate victory.

Yes, they “possess a hundredfold the power of al-Qaeda.” We would love to know how Norris calculated that and we’d also like to know what “well on the way to Caliphate victory” means. Does that mean the Caliphate itself is nearly victorious? Or does that mean ISIS is soon to be victorious in realizing its goal of creating a Caliphate? Because if it’s the former, well, of course they’re going to say that – we’re sure that “by their own estimation”, ISIS is a lot of things. If it’s the latter, we suggest Norris take a look at a map of some real historical Caliphates and decide how close he thinks ISIS is to realizing their goal.

In true Walker fashion, Norris goes out in a blaze of glory with four policy recommendations.

Number 1: Mr. President, we need you to quit sticking your head in the sands of cultural, military and religious ignorance and minimizing the power of ISIS. We need you to unleash the full force of the U.S. military and U.S. Intelligence to destroy it both domestically and abroad. We must triple the protection at all of our ports and borders. It is also imperative that nations around the globe join us in collectively stopping ISIS’ Caliphate.

Right. It is imperative that nations around the globe “join in collectively stopping ISIS”, which is why it’s so damn curious that Washington steadfastly refuses to cooperate with Russia and Iran on doing just that.

Number 2: We need the White House and major mainstream media to quit downplaying Islamic terrorism and playing politically correct cards by moving away from terms like terrorists and jihadists, and condoning Islamic extremism under the rubric of pacifying peaceful Muslims.

Yeah, really. What’s with the lack of ISIS media coverage? Besides the fact that CNN has run nothing but ISIS coverage for 72 straight hours to the point that apparently, everyone other than Anderson Cooper and Erin Burnett just got to take three whole days off, and besides this… 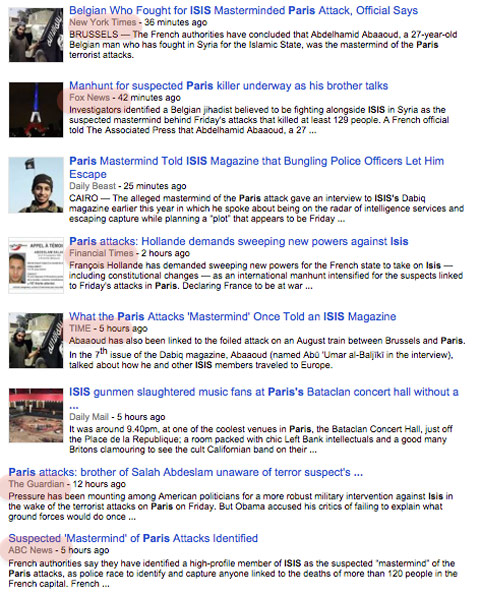 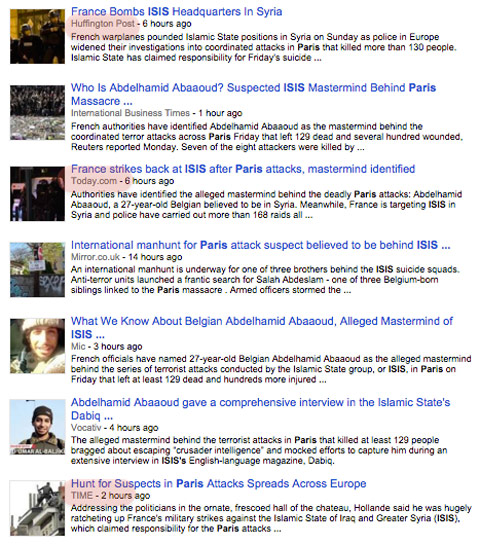 Number 3: We do not need Washington to foolishly open its arms to Syrian refugees when we are in a war with ISIS. Are we naïve enough to believe that the jihadists aren’t packing the flood of Syrian refugees with their minions and importing their jihad into multiple nations around the world, including the U.S.?

Honestly Chuck, who knows at this point and since we’ve covered it on any number of occasions, we’ll just leave it for now.

Number 4: One year from now, we absolutely need a new (Republican) president who rebuilds and expands the U.S. military and U.S. Intelligence, fighting Islamic jihadists like never before, before they succeed in coordinated acts of terror in the U.S. that make Paris and even Sept. 11 seem like Islamic child’s play.

Ah, yes and there it is. The obligatory political plug. Fair enough. Everyone is entitled to that every now and again we suppose.

The irony here is that Norris’ premise may in fact be right. That is, what happened in Paris may very well be the spark that starts World War III and so on that point we have to give it to Walker: he seems to be drawing a plausible connection between Poland ca. 1939 and Paris 2015 although it’s not at all clear that he fully appreciates what might well be going on behind the scenes.

If Norris is right and World War III did indeed start last Friday in Paris, the only question for ISIS now is this: will Walker be joining the fight?

Because if so, expect Raqqa to fall in about, oh, let’s just call it 14 minutes…