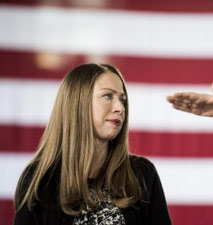 Though she has already been honored with a lifetime achievement award at the ripe old age of 37, former First Daughter Chelsea Clinton seems to be a bit disconnected from reality… and history.

When the Republican Party featured a picture of an (obviously) enhanced photo of President Abraham Lincoln wearing a ‘Make America Great Again’ hat, Clinton chimed in with what may be one of the stupidest Tweets in recent memory.

The cover of the 2017 Lincoln Day Dinner program for Republican Party of Palm Beach County tonight at Mar-a-Lago. @WPTV pic.twitter.com/SJPlB8V6qb

Which was promptly followed by this gem from Chelsea:

Please tell me this is photoshopped. Please? https://t.co/WezDQx6IvT

As you may have expected, the internet then proceeded to once again utterly destroy her:

@ChelseaClinton Nope Lincoln was wearing that exact hat at the Theater

@ChelseaClinton @yashar Pretty sure he wore it at the Gettysburg Address, too.

@ChelseaClinton Not Photoshopped, he started wearing that hat right after he won his WWE title. pic.twitter.com/ZlKZHTvRzN

@ChelseaClinton …I once said the same thing about this pic and no – not photoshopped! ? pic.twitter.com/ZFwelbKT08

@ChelseaClinton I remember this photo was taken at the 1856 Republican National Convention and. is real.

@goldmyra @ChelseaClinton Trump can’t even come up with. cap that wasn’t ripped off from Lincoln…!

@ChelseaClinton I’m sorry Chelsea, much like everything else going on in America, this is frighteningly real.

.@ChelseaClinton Not a photoshop, and neither is this one: pic.twitter.com/J9NX1igZeh

@ChelseaClinton Oh yes, Chelsea, it’s as fake as the resume you have that earned an “achievement” award.

@ChelseaClinton Lincoln just got off his unicorn and just when the Bosnian sniper fire started, he put the hat on.

@ChelseaClinton You’re not particularly bright, are you ? Better rack up those lifetime achievement awards now before it’s too late.

@ChelseaClinton real question is will chelsea visit @HillaryClinton in prison when they #LockHerUp?

As it turns out, the MAGA hat has a long history, according to the Internet:

@ChelseaClinton The cap goes way back…it was a little different back in the day pic.twitter.com/aMc4Eq4pdl