If you think the Federal Reserve’s quantitative easing will only affect the US dollar, think again. Now that the United States has officially begun it’s third round of money printing to the tune of at least $40 billion monthly, central banks around the world will also act to ‘defend’ their currencies in kind.

Moreover, because everyone is joining the fray, all of that extra money will make its way into key resource stocks and commodities, adding further upside price pressure to essential goods like food and fuel.

Quantitative easing is really another word for currency wars. A weak U.S. currency puts continued pressure on the Japanese Yen, the Chinese Yuan, the South Korean Won, the Australian dollar and other currencies.

The lower the U.S. dollar the greater the intensity of currency wars. The break below the key uptrend line on the Dollar Index chart was an early warning of the third round of quantitative easing (QE3). 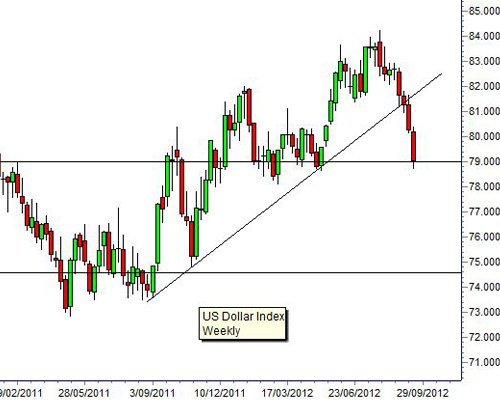 The most important question now is to use the chart to examine the potential downside limits of a QE3 weakened U.S. dollar.

The weekly close below this uptrend line was the first signal of a major change in the trend direction. It came before the announcement of QE3, last week.

This target can be reached very rapidly over three to four weeks. A rapid collapse of the U.S. dollar puts immediate pressure on other dollar-linked currencies.

There is a very low probability the U.S. dollar will resume its uptrend. The move below the value of the uptrend line and a fall below 79 confirm that a new downtrend has developed.

The weakness in the U.S. Dollar will hurt export dependent economies and companies.

There are two ways this may end – neither of which is going to be good for the average Joe:

Both scenarios are virtually the same, as both will end with complete and utter destruction of Americans’ wealth.

Despite the mainstream notion that inflation is under control and most of the money is sitting on the sidelines with banks, all we need to do is look at the price increases for consumers since private and public bailouts begin in late 2008. Gas has doubled. Food is up over 25%. Electricity costs and the cost of just about every other non-debt based asset has steadily risen.

This is not going to stop.

While timelines remain elusive because of never ending government intervention into financial markets and economies, the policies being instituted by central banks around the world can only lead to continued degradation of paper currencies and the rise in prices of all goods linked to those currencies.

In January of 2010 we suggested a strategy of buying physical commodities at today’s lower prices and consuming those commodities at tomorrow’s higher prices. The trend for fiat paper money and physical assets has not changed and is, in fact, more pronounced now than ever before.

The US dollar is being systematically weakened until it no longer exists as a viable means of exchange. When this happens you’d better be prepared to operate in a society where traditional money is replaced with mechanisms of exchange like precious metals, food, critical supplies and production skills.

You can begin taking simple steps to prepare now. The collapse of the existing global paradigm is accelerating and if you’re not ready for it the price you’ll pay will be severe.