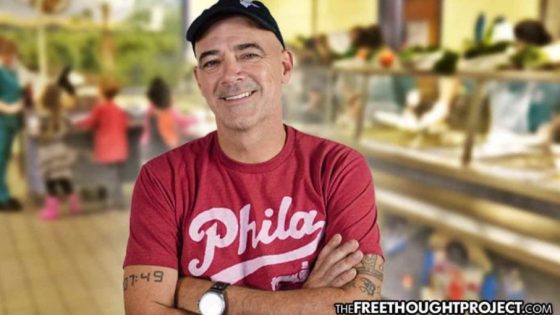 This article was originally published by Matt Agorist at Activist Post.

*EDITOR’S NOTE: Read this article first for more background: School’s Warning: “Your Child May Be Taken From Your Home” Over Unpaid Lunch Debt

Luzerne County, PA — As TFTP [The Free Thought Project] reported this week, Wyoming Valley West School District parents, whose school lunch accounts were delinquent, received a disturbing letter threatening to have their children kidnapped by Child and Youth Services if they don’t pay their past due balances. The letter garnered national attention and drew the ire of many, including a millionaire CEO who offered to pay these past due balances. In an infuriating move, however, the school board rejected his offer and is opting for stealing the kids instead.

Todd Carmichael, chief executive and co-founder of Philadelphia-based La Colombe Coffee, made an offer this week to pay off the more than $22,000 in unpaid lunch bills to help the parents who so desperately need it. However, school board president Joseph Mazur rejected the offer on Tuesday, arguing that the money is owed by parents who can afford to pay it.

But this does not matter to Carmichael, who simply wants to wipe away the debt.

Carmichael — who is widely recognized for being the first American to cross Antarctica to the South Pole, on foot, alone — made this offer because he says, as a child, he was helped by receiving free lunches. He explained his intent in a letter sent to papers in the Wilkes-Barre area on Monday.

Carmichael told reporters on Tuesday that he remains steadfast despite the school board rejecting his offer, and noted that it still stands.

“I’m just going to hold on and I’m going to continue to be optimistic and see if we can’t do something,” Carmichael said. “Even if you’re a difficult person, we’re in. What can we do?”

Carmichael explained how he was struggling to understand why anyone would turn down this offer to help, as it seems like a no-brainer.

Wyoming Valley West’s solicitor, Charles Coslett, said he did not know what the school board planned to do, according to a report in the Associated Press.

“I don’t know what my client’s intention is at this point,” Coslett said. “That’s the end of the line.”

As TFTP reported on Monday, the letter sent to over 1,000 parents — threatening to take their children — reads in part:

You can be sent to dependency court for neglecting your child’s right to food. The result may be your child being taken from your home and placed in foster care

The letter which one parent equated to school-sponsored bullying drew immediate outrage from the community as well as Luzerne County officials who immediately demanded the school retract its letter and explicit threat to steal kids away from their parents. Luzerne County Children and Youth Services executive director Joanne Van Saun said:

The school board’s disturbing position was countered by county officials who claimed the school system is simply lying about the power the schools have to steal kids. The county manager and the child welfare agency director penned their own letter sent to the school superintendent telling the school system to stop lying to parents. According to PennLive:

Luzerne County’s manager and child welfare agency director have written the superintendent, insisting the district stop making what they call false claims. Their letter calls the district’s actions troubling and a misrepresentation of how the Children and Youth Services Department and its foster care program operate.

It is worth noting that poor parents qualify for free lunches. Parents who have low incomes can qualify for reduced lunch fees. And working parents who qualify for neither of the federally-funded programs pay the full price for school food.

So, it’s safe to say the letters were sent to working families too well-off to afford free lunches and too poor to keep their children’s accounts paid up.

While it is certainly unacceptable for parents — who can afford it — to choose not to pay for their child’s lunch, oftentimes those right at the free lunch cutoff often struggle to make it work. Sadly, however, instead of attempting to work out a solution, the school board is moving in to take kids and place liens on property.

There you have it. The school board is attempting to collect $22,000 in debt and their only option is stealing kids. When someone comes along and proposes another option, they deny it and stick to stealing kids. The epitome of bureaucratic logic.

Matt Agorist is an honorably discharged veteran of the USMC and former intelligence operator directly tasked by the NSA. This prior experience gives him unique insight into the world of government corruption and the American police state. Agorist has been an independent journalist for over a decade and has been featured on mainstream networks around the world. Agorist is also the Editor at Large at the Free Thought Project, where this article first appeared.