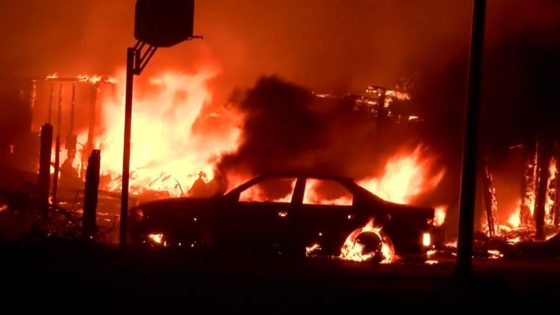 As California burns, experts say these extreme fires are no longer rare, but the new normal. The town of Redding is being threatened by the fast-growing Carr fire outside of the town and the fire itself is so hot it has begun creating its own weather.

Recent California wildfires have been notable for their ferocity. At least six people have died, including two firefighters, in the past month in fires that continue to burn hot.  Last year, 44 died as a result of the wine country fires that caused epic destruction. The conflagrations have also spawned bizarre pyrotechnics, from firenados to towering pyrocumulus clouds that evoke a nuclear detonation. These events are not aberrations either, say the experts. They are California’s future and the new normal for the entire state.

As of Monday night, the Carr fire was just 23% contained, according to the California Department of Forestry and Fire Protection, known as Cal Fire, as reported by CNN. As of Monday morning, the Carr fire had burned more than 98,000 acres, and containment stood at only 20%, with more than 5000 structures threatened. In the evening, Cal Fire began lifting evacuation orders, allowing residents mostly on the east side of the fire to return home. Awareness of fires “is not just because the news is covering it more”, said Michael Wehner, a senior staff scientist at the Lawrence Berkeley National Laboratory. “More acres are burning. That is almost certainly due to climate change.”

Almost all of the researchers assume that climate change is the reason the fires in California are moving the proverbial goal posts. “Climate change is continuing to unfold,” said Anthony LeRoy Westerling, a professor of management of complex systems at the University of California, Merced. “The impacts from it will probably accelerate. There won’t be a new normal in our lifetimes.”

According to the Guardian, Gabriel Lauderdale, a Redding firefighter, said the rhythm has changed even during his 10 years fighting fires. When he started, sometimes years passed without fires so big that his company was called to help outside their county. “Now, it doesn’t just happen every year, it happens multiple times every year,” he said. He hasn’t been home since June 25 either because he has been helping fight fires all over the state of California.

But scientists also want to emphasize that climate change is not the only way humans are implicated in California’s astonishing fires and should not be used to “relinquish local or individual responsibility” said University of Oregon researcher Mark Carey. Increasingly people are building in risky areas, and forest managers have allowed stands to grow too dense.