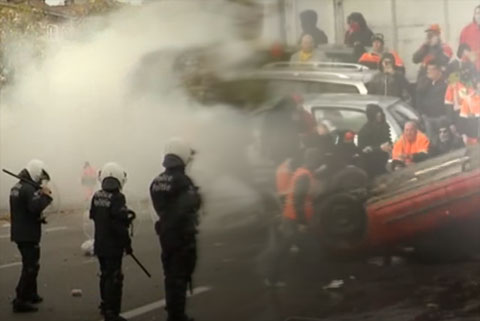 Some 100,000 Belgians took to the streets. Reports summarized:

Protesters held banners and burned flares as they walked down the streets of Brussels, disrupting trains and buses throughout the capital of the European Union (EU), AFP said.

Among them were violent protesters who clashed with police in the streets in a scene that has become familiar across the globe – riot police firing tear gas and a holding a line against individuals throwing flares and other objects, setting fires and turning over cars. A large police vehicle also fired water cannons on protesters.

The underlying causes are global in scope, and reflect major changes in world order that are now putting major pressure on Europe in particular on several fronts.

About 100,000 Belgians are in the streets of #Brussels fighting for a brighter kind of society! #NoFlemish pic.twitter.com/tHDiSJQXYw